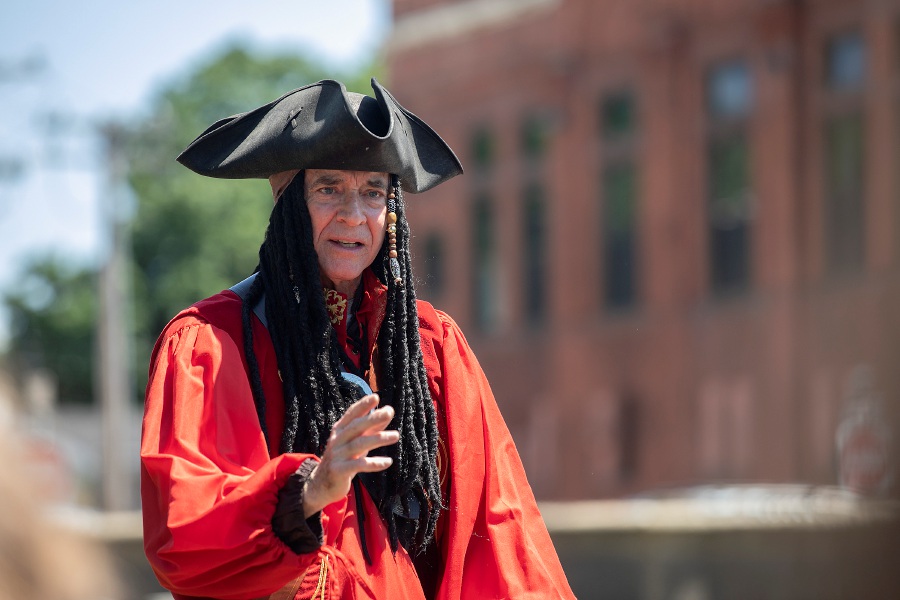 WALLINGFORD – The lives of residents who have shaped Wallingford’s growth were recognized during a tour of Center Street Cemetery on Monday morning.

More than 100 people joined volunteers who maintain the downtown historic cemetery and representatives of local historical groups for the walk, stopping around the graves of local legends like Lyman Hall, Moses Y. Beach, Abraham Doolittle and Reverend Samuel Whittlesey.

Bob Beaumont, vice president of the cemetery association, said the visit, part of the town’s jubilee celebration, was aimed at teaching residents and descendants of those buried about the town’s history.

Cemetery Superintendent Bob Devaney, who is also co-chair of the Wallingford 350+2 Jubilee Planning Committee, led the visit. He explained the difficulty of maintaining some of the centuries-old markers, the oldest of which are often field stones with names engraved on them. In many cases, families have since purchased monuments to accompany the rudimentary stones, detailing the legacy of their ancestors.

Continuing his own tradition of donning costume and giving his impression of historical figures, Mayor William W. Dickinson Jr. took on the persona of a pirate who protected ships carrying rice. Lyman Hall grew up in Georgia from British warships. It chronicled Hall’s journey through his education in Wallingford and his career as a pastor and doctor until his move to Georgia to build a rice plantation.

Dickinson noted that Hall was instrumental in representing Georgia in the Continental Congress and pushing the South to support the revolution, which led to the British burning his property and driving him into hiding.

During the presentation of Lyman Hall’s life, a descendant explained how Center Street Cemetery came to acquire the stone placed atop the monument from Hall’s original grave at its plantation in Burke County, Pennsylvania. Georgia. When Hall was reinterred in Augusta, Georgia, officials contacted the Connecticut state government to offer the stone; state officials reported to Wallingford, who had the stone brought up by train and it was paraded around town before being placed in the cemetery.

A more recent addition to Devaney’s tour of the cemetery is the grave of William Smith, a Wallingford resident who was among the first volunteers to join the Massachusetts 54th Infantry Regiment, which was the nation’s second African-American unit to be high for the Civil War. He fought in the Battle of Fort Wagner, which was depicted in the 1989 film Glory.

After the war he returned to Wallingford and earned his living by trapping and hunting along the Quinnipiac River and Community Lake. He formed a fife and drum corps, the Dreadnaughts, and participated in community parades, including past Jubilee celebrations. Devaney became aware of Smith’s legacy when he had a conversation with a group of descendants who had returned to his grave to play tribute drums.

“I learn something new here every day. Every day there is a summarized history of this place,” Devaney said.

The tour was given after the rededication of the town’s Founders Stone, on which are inscribed the names of the 38 founding families who petitioned the state for the founding of Wallingford. The city borders were officially set in 1670 and around 126 people settled in the area to start building their properties.

Dozens of descendants of these families were present for the rededication, many from homes they have occupied for generations and others traveling from out of state.

David and Beth Brockett returned from Massachusetts for the ceremony and said the town had undergone a transformation since growing up here in the 1960s.

“It was much quieter, almost rural,” Beth Brockett said. “…I would say in my memory, it was almost idyllic.”

Even today, David Brockett said he probably knows more people from his upbringing in the tight-knit community of Wallingford than any other place he has lived. Nevertheless, he was surprised by the number of relatives he met during the rededication and the breakfast that preceded it.

Wallingford residents Jessica Durfee and Melissa Reynolds, who belong to another branch of the Brockett family tree, said they were delighted to be able to be introduced to the Brockett siblings, whom they did not know before the ceremony of Monday.

After taking part in the parade on Saturday and with the rest of the week’s festivities ahead of them, they said the jubilee represents the community that has kept their family in town for nine generations.

“I love this place, I see no reason to leave it,” Durfee said, noting that her own children already wanted to stay in town too.

The Wallingford Preservation Trust held a dedication to name the porch outside its Franklin Johnson mansion as the Rita Katona Welcome Porch, in memory of a deceased resident who created a literal welcome car that she would bring newly arrived residents to see if they needed it. helping them settle into their new home and community. Trust President Jerry Farrell Jr. said she embodies the organization’s mission to be welcoming to all.

The trust hosted Revolutionary War re-enactors from the Lebanon City Militia on Monday and is hosting tours of the Johnson Mansion and Nehemiah Royce House from 1 to 4 p.m. for the rest of the week. The mansion tells the story of the town’s silver industry, while Royce House hosts the Trust’s ‘Enslaved Wallingford’ exhibition on the town’s slavery history.

The Wallingford Historical Society also had Co.F reenactors from Connecticut’s 14th Volunteer Unit set in the Civil War era on Monday and will be open all week for tours.

Journalist Devin Leith-Yessian can be reached at [email protected]