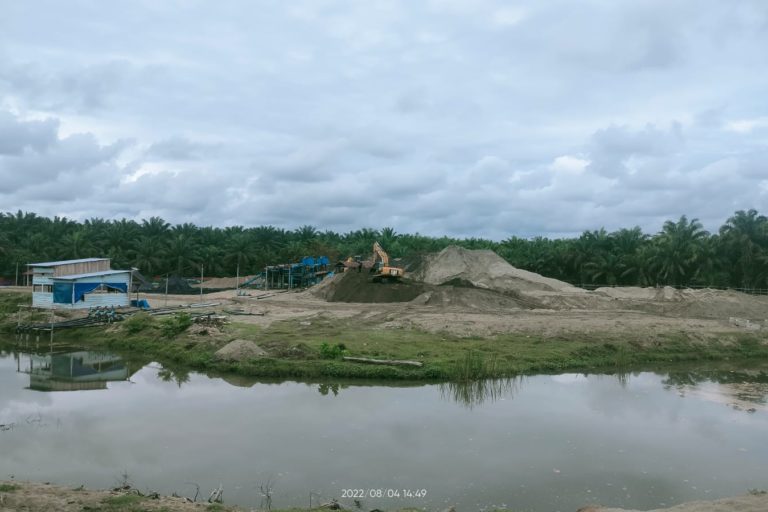 JAKARTA — Villagers on the Indonesian island of Sumatra have called on authorities to revoke the license of an iron ore miner after he continued to operate in violation of an order to stop his activities.

This order stemmed from a July 7 field visit by local government officials, who found a myriad of violations at the site operated by PT Faminglevto Bakti Abadi (FBA) in the village of Pasar Seluma, Bengkulu province. The company is said to have operated without a permit, dumped waste in a nearby river and operated within 30 meters (100 feet) of the coast, which is prohibited.

Bengkulu Maritime Affairs Agency also found that FBA’s operation had the potential to damage the region’s marine ecosystem, as the company planned to mine 350 m (380 yards) offshore.

Based on the findings, Bengkulu Governor Rohidin Mersyah ordered FBA to cease operations.

“That is why [the mining operation] must be temporarily halted until the company obtains full permits,” he said on July 10, as quoted by the state news agency. Antara. Rohidin also requested on July 22 the ministry of mines in Jakarta to carry out an inspection and revoke the mining license of FBA if necessary.

However, villagers in Pasar Seluma say they saw the company continue to operate in the area from July 24.

“The mine hasn’t stopped working even now,” Elda Nenti, a villager from Pasar Seluma, said in an August 1 online press conference. “[Even] today, they are still working and flirting. It really troubles us.

Ledianto Ramadhan, an attorney for FBA, denied the allegation, saying the company was simply testing its equipment. He also said the FBA has complied with all regulations.

Dozens of women from Pasar Seluma, including Elda, have since set up camp in the mining area in protest. They ask the Minister of Mines, Arifin Tasrif, to follow up on the request of the Governor of Bengkulu by revoking the mining license of the FBA.

They also asked the Ministries of Maritime Affairs and the Environment to investigate the matter, and the inspectors of mines to force the FBA to stop its activities. Villagers say they also want the Governor of Bengkulu to report suspected FBA violations to law enforcement.

The Bengkulu chapter of the Indonesian Forum for the Environment (Walhi), which advocated on behalf of the villagers of Pasar Seluma, said that FBA finally stopped mining on August 12 based on local residents’ observations.

“Because there was repeated pressure [from the villagers and the local government]the business has stopped [operating]Walhi Bengkulu advocacy officer Dodi Faisal told Mongabay.

But it came more than a month after Bengkulu’s governor issued the order, and long after protests from residents, he said.

In January, Erwin Octavian, the head of the Seluma district, where Pasar Seluma is located, also published a letter asking FBA to suspend operations pending an assessment by provincial authorities of the company’s permits.

Dodi said FBA used to dismiss local concerns and government orders, adding there was no guarantee the company would not resume operations in the future. He said part of the problem is that the order from the provincial authorities was merely verbal and not written.

He said residents were still waiting for the central government, in this case the Ministry of Mines, to issue a written order to the FBA.

“If not, then we are afraid [the company will resume its operations]”, said Dodi. “We are afraid that there are attempts to eliminate the evidence [on the ground].”

He said that Walhi, the villagers and the provincial inspector of mines had sent a letter to the Ministry of Mines, asking it to issue a written order to the FBA, but had not yet received a response. Once a written order is issued, villagers could use it to stop any future FBA takeovers, Dodi said.

In the meantime, villagers will continue to monitor the mine from their camp, which has been set up just outside the front gate of FBA’s concession, Elda said.

” We will stay [here] until the governor and the ministry come to the scene,” she said.

This is the second protest camp the villagers have set up at the FBA site. In December 2021, they organized a similar movement. But because they set up camp inside the compound, the police demolished their tents and stopped 10 villagers.

With the fate of the FBA mining concession still up in the air, Walhi Bengkulu coordinator Frengky Wijaya said the government should be more decisive and revoke the concession altogether.

Right now, it looks like there’s still a chance for FBA to get the necessary permits and fully resume operations once it meets all the conditions, he said.

“It is such a shame that the provincial government is not decisive, even in protecting investments that violate [the law]Frengky said during the online press conference.

Elda said all she wanted was for FBA, which has been operating in the area since 2010, to leave her village. She said mining has impacted the livelihoods of villagers, who depend on farming water clams.

She said villagers could earn up to 300,000 rupees ($20) a day by farming clams. Now they are struggling to earn even a third of that, blaming sewage from the mine for polluting the beach where they operate their fish farms, Elda said.

“We are only asking that the mine be removed from our village immediately,” she said.

FEEDBACK: Use this form to send a message to the author of this message. If you want to post a public comment, you can do so at the bottom of the page.