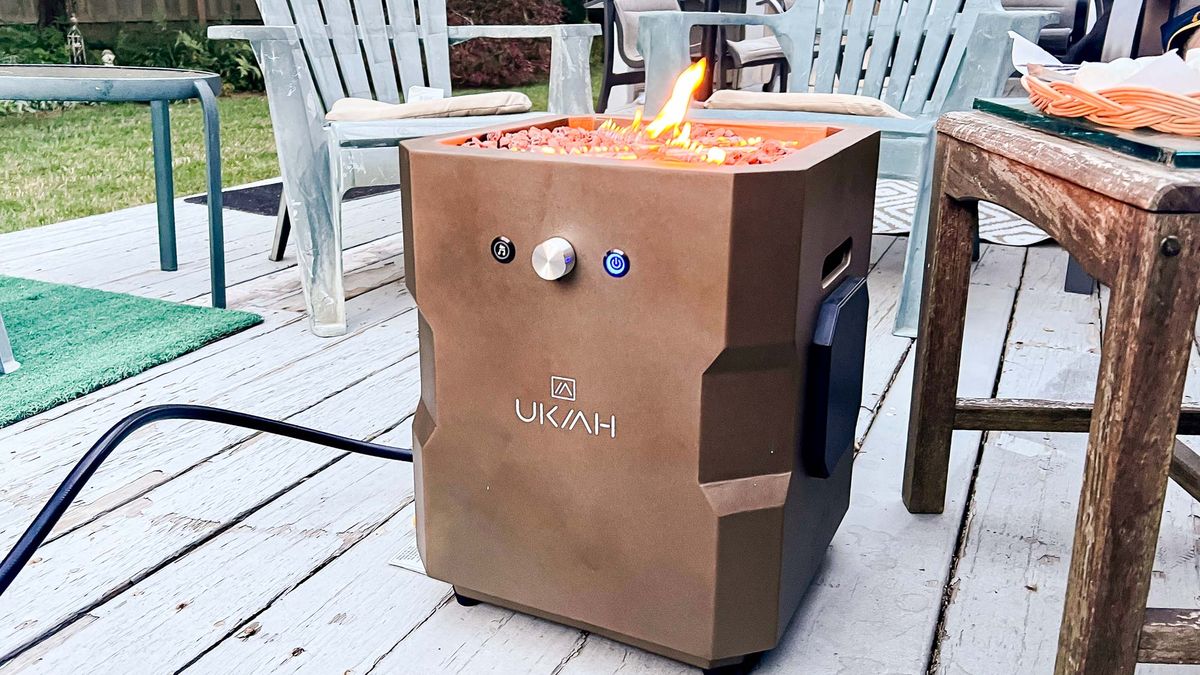 When I invite the whole neighborhood to check out a new gadget, you know it’s something exciting. Or, perhaps spellbinding in the case of the Ukiah Tailgater II, a propane fire pit with flames that dance to music.

Legends say my neighbors are still mesmerized by the night of s’mores around the Tailgater II. That’s right – the smart fireplace doubles as a Bluetooth speaker and has a Beat to Music mode, which makes the flames vibrate at a mesmerizing beat, whatever song is playing. But it’s more than just a light show. For $599, the Ukiah Tailgater II also has practical uses, like generating heat and grilling food with a cooktop attachment.

As the name suggests, the Tailgater II is an ideal centerpiece for parking lot parties. Sound is battery powered, with around 30 hours of music per full charge. Although the unit alone is surprisingly portable, you’re required to carry a 20-pound propane to fuel the fire, which is the only hiccup (and a little more) I found in this Ukiah Tailgater II fire pit review. .

The Ukiah Tailgater II fireplace is available now (Amazon (opens in a new tab), Ukiah) and costs $599 and comes in two color options, black and olive green. For $349, Ukiah offers a first-generation Tailgater Fireplace, which looks similar to the Tailgater II in appearance but sports a lower quality sound system and lacks the Beat to Music feature.

Ukiah also sells a $69 cast iron cooktop accessory that turns the fire pit into a camping stove. At the time of doing this review, I didn’t have the accessory, although it seems like a worthwhile purchase for when/if I take the Tailgater II to a real tailgate. But to make smores in my garden, it was not necessary.

Installing the Ukiah Tailgater II is no problem. It’s just a handful of parts: the 17 x 14 x 14 inch unit, a box of lava rocks, the combo propane tank adapter and hose, the speaker charger and the magnetic lid. It even comes with a Ukiah-branded lid for the connected propane tank and a rechargeable AA battery for ignition. Getting the battery inside the device was probably the trickiest part.

After charging it up and plugging in my propane tank, I had both music and fire in minutes. One side of the speaker features buttons and a volume wheel for music control, although sound can also be controlled directly from the Bluetooth source, which in this case was my smartphone.

The opposite side features the starter and fire intensity knob, while the other two sides of the cube-shaped pit house the speakers and cutouts for transportation.

Weighing 34 pounds, the Tailgater II is substantial but easy enough to carry around a patio, or from the backyard to the trunk of a car. While I’d like to take it back to the beach, that would also mean carrying a propane tank across the sand. However, this is the same situation for any propane camping grill.

To start the shindig s’mores, I turned on my propane tank, pressed the start button and turned it to “High”. Once the flame flowed through the X-shaped path, I could adjust the intensity of the flame to my liking.

Levels range from a small blue flame barely there to a roaring amber fire that is very hot to cook on. To roast marshmallows, I kept the flame at about 75% intensity.

For “Beat to Music” mode, turn the start button to Beat to Music and I pressed the music note button on the music control side of the device. When I played my next song on my iPhone, which I paired to the fireplace via Bluetooth, the flames started moving to the beat. “Listen to the Music” by the Doobie Brothers (a fitting choice for testing, don’t you think) had everyone staring at the Tailgater II with smiles of amazement. Sure enough, the flames were bouncing at a perfect pace. The only thing I will say is that Beat to Music is strictly for entertainment – it’s not the mode for cooking.

As far as audio quality goes, the speaker sounded surprisingly loud. It has a 100-watt 2.1 audio system with two 3.5-inch speakers and a subwoofer. Audio performance isn’t quite as sophisticated as the Sonos Move, the dedicated wireless speaker I normally use for backyard gatherings, but it’s more than adequate. The romance that drives Elton John’s “Your Song” translates into precise piano work and clear vocals. Everyone sang, which is exactly what you’d expect from this type of device.

Priced at $599, the Ukiah Tailgater II isn’t a must-have gadget, but it’s certainly fun to have. Whether you’re hosting outdoors, frequenting tailgates, or going camping, the Tailgater II brings the music, the cooktop, and the entertainment. Don’t forget that you will need to bring a propane tank for the party.

It’s safe to say that the Ukiah Tailgater II hearth and its Beat to Music feature are the talk of the town in my neighborhood. Although rest assured, the Tailgater II also offered a comfortable experience for quiet nights alone. The best part? I can blaze a fire for a few minutes if that’s all I want. To turn on the fire and the music, all you have to do is press a few buttons. Talk about convenience.