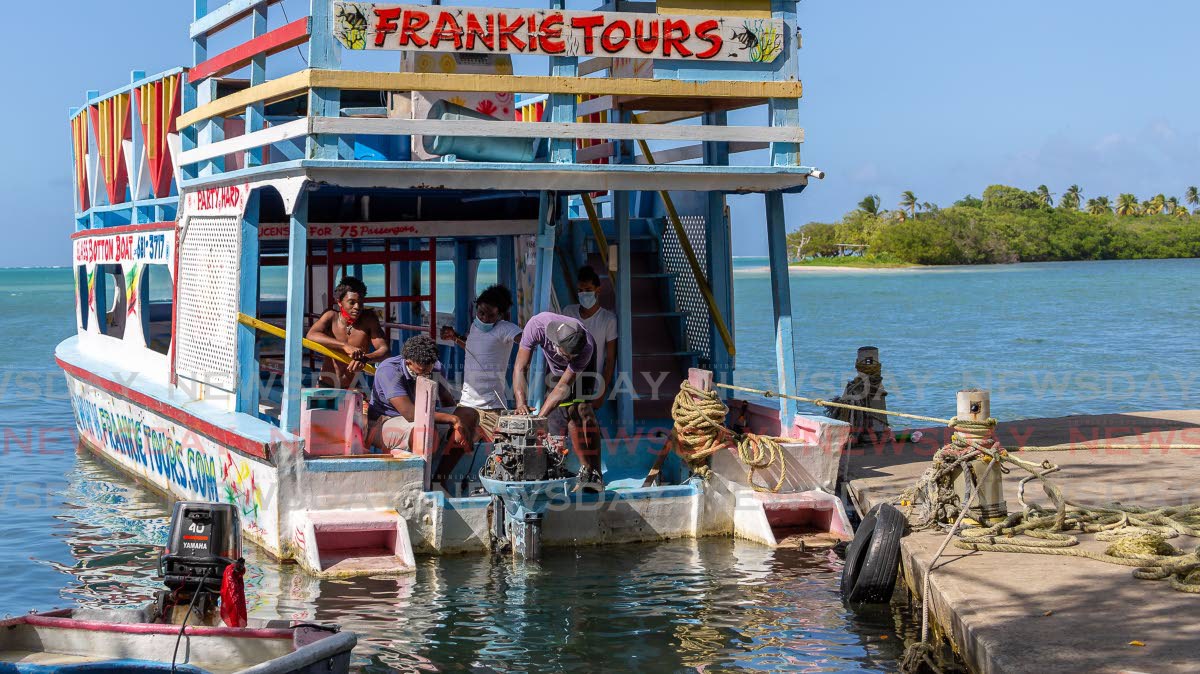 Considered one of Tobago’s best tour guides, Michael Frank is not only an experienced and knowledgeable reef tour operator, but he is also committed and dedicated to bringing a smile to Tobago’s visitors.

In an interview on Tuesday, Frank spoke about his 35 years fulfilling his passion of introducing tourists to the world famous Buccoo Marine Park and leaving a lasting impression on them.

After registering his company Frankie Tours and Rentals 30 years ago, Frank went on to register his own tour boat.

“I love what I do, that’s where I see myself.

“I like to see people happy. And because I love seeing people happy, taking people out on a boat and making sure they’re having a good time – that makes me happy, that’s my joy,” he said.

Although the covid19 pandemic has been detrimental to the industry, Frank is undeterred.

Highly approachable and enthusiastic with a keen sense of humor, he said he enjoys demonstrating the warmth and hospitality that Tobagonians are known for.

Frank said it was on the suggestions of others that he started considering a career as a tour guide.

“I was at Pigeon Point and some people wanted to go to No Man’s Land. I was a reef patrol officer with the THA at the time and they were behind me wearing them, so I wore them. The tour was so good they were impressed. They asked me why I don’t do it as a job, I told them I don’t really do it but there are tour operators and they decided they would send people to me directly and from there, I just rode and never stopped.”

But how did he get into the business?

“I was at Pigeon Point and some people wanted to go to No Man’s Land. I was a reef patrol officer with the THA at the time and they were behind me wearing them, so I wore them. The tour was so good they were impressed. They asked me why I didn’t do this as a job, I told them I didn’t really do this, but they were tour operators from England, and they decided they would send people to me directly and from there I rode and never stopped.

He said he then started renting boats until about five years later he bought his very first boat.

He said a year later he decided to get certified, which he considered a plus for his business.

“I trained as a tourist guide and I completed all the necessary training. I applied to the Ministry of Finance for a tour guide license.

He is responsible for two daily trips at 11 a.m. and 2 p.m. from Gibson Jetty to Bon Accord.

“When they go to Buccoo Reef, they look at things like nylon pools, coral gardens and no man’s land.”

He said Gibson Jetty is his preferred location for loading and unloading these trips.

“From this place, you don’t get wet to go by boat, whereas if you come from Store Bay, you have to get in the water to get on the boat, which is complicated for the elderly, especially now that we have all these high tides and waves constantly rolling in. From this pier anyone can get on the boat, just come here with a bus or a car and walk from the pier to the boat – c It’s much easier This place is much easier to use than from Store Bay.

He said other reef tour operators also depart from Gibson Jetty, but not consistently, “mainly when the water is choppy.”

With his love for adventure, the Buccoo Reef trip is not the only service provided by Frankie Tours, as he said, each tour provides an interactive, enjoyable and memorable time.

“We also do a lot of land tours – we visit the rainforest, waterfalls, sightseeing, hiking. We also do a lot of shore excursions that take you along the coast by boat to those beaches that you can’t get to by car and you can see things like dolphins, turtles. We also organize many beach BBQ activities like weddings, anniversaries, birthday parties – anything to do like that, we provide the service where we could take you anywhere around Tobago, any hidden beach or any secluded place.”

” Truly bad. We had next to nothing for two years, now we’re really starting over, but covid19 has really mixed up the businesses. It started but slowly, I would say.

His most booked trip, he said, remains both coastal tours and Buccoo Reef tours and although the capacity is 75 he said that under public health guidelines they can accommodate a maximum of 37 people.

He said his business is a true local family business, with expert local guides and skippers, all very experienced.

“Now we have about nine employees currently, but before the pandemic we had 20. We will soon have more boats in the water, so we will have more people employed as more boats come in.”

He said that currently he has four boats with one under construction as maintenance remains a challenge.

In addition, all of its employees are trained in customer service.

“They are trained very often; we try to maintain the standard that holds us together, which is proper customer service. I don’t want any issues with guests, so I always try to make sure they stay 100% under control.

Meanwhile, he also said customer safety is paramount as his company prides itself on always providing a safe environment for all visitors.

He said the reef is currently being properly maintained.