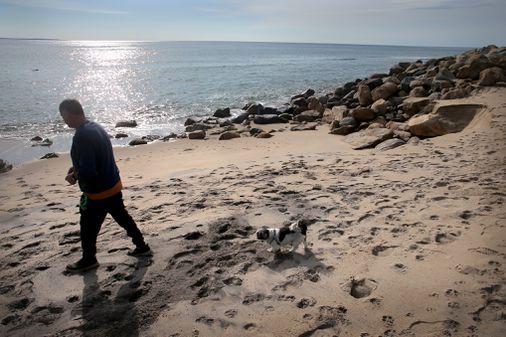 But Keeley is concerned about some of them. The commission focused on securing the right to pass along the shore, while ignoring or outright rejecting the right to stay there to enjoy it. By doing so, they could cast doubt on people’s ability to stop, sit or linger, which Keeley and other activists believe is also guaranteed in the state constitution. That is what this whole dispute is largely about. After all, the South Kingstown police officer only removed the handcuffs that day in 2019 when Keeley sat down to shake sand off his seaweed haul.

“If they’re just letting us walk the shore then we better not have anything because it goes back to before 2019,” Keeley said. “This passage alone is 100% what the riparian owners want.”

The divisions that emerge are not entirely surprising: it has been said that in a state of over a million people, there are over a million different opinions on access to the coast, all vigorously defended. But it’s about the complicated task at hand: not just figuring out where people can access the shoreline outside of public beach boundaries, but what they can do when they get there. After all, a day at the beach and a long walk on the beach can be two very different things.

House Minority Leader Blake Filippi, a Block Island Republican and co-chair of the commission, noted that the group has yet to release its recommendations. He thinks they should focus primarily on the geographic area people can access, rather than what they can do there.

“I’m not telling people not to engage with us until they see the final product. I say withhold ultimate judgment until the commission produces a final product,” Filippi said in an interview.

Indeed, any legislation would still have to go not just through the House, which convened the panel, but also through the Senate, and then make its way to the governor.

Currently, the state constitution stipulates that people have certain rights to the fishery and the shore. This includes – but is not limited to – fishing and swimming from the shore, passing along the shore and collecting seaweed. But a controversial 1982 state Supreme Court case called the Ibbison decision set the public access line at the mean high tide line, which is a measurement taken over 18 years. It’s more limited than people think.

The commission responsible for resolving these disputes met for the last time on February 10. After weeks of information-gathering meetings, they looked at two different legislative proposals and discussed them for an hour, all the while trying to figure out how to do it in a way that wouldn’t get landowners suing the state. .

A proposal came from environmental group Save The Bay that would decriminalize trespassing within 10 feet of the recognizable high tide line – the physical mark that a high tide makes on the shoreline – when people were exercising their constitutional rights on the shore. It was similar to previous legislation first introduced in 2020, which Keeley, for his part, sees as a fair compromise.

The other was from Mark McKenney, a solicitor and resident of Buttonwoods Fire District in Warwick. McKenney agreed there was too much uncertainty around the mean high tide line. Like others, he pointed to the seaweed line, a line visible in the sand usually further inland, as a better mark. He suggested passing a law stating that “passage along the shore is permitted” up to the seaweed line.

He added a caveat: the law would not give people the right to set up chairs, tents, umbrellas, grills or boomboxes, and “no rights are created for people to remain on the shore”.

The installation of chairs and parasols is indeed a major concern of private owners. And the commission’s focus on the passage came as a relief to at least one of them, though he noted he would still face legal challenges.

“None of my neighbors have a problem with people walking along the shoreline,” Keith Wilcox, a South Kingstown waterfront property owner, said in an interview. But “keep moving forward, like we said. You don’t sit on my beach, you don’t put a towel down, that’s what the constitution already says.

Given that the commissioners plan to set the factual background to the issue for their bill, as a roadmap for future judges, these distinctions would be extremely important. And throughout the last meetings, the subject has often come up in passing, the shore being often compared to a sidewalk. You can use it to pass and rest briefly if you are running, say, a marathon, but not to stay indefinitely.

“It’s really the right to pass, and that’s what’s guaranteed in the constitution now,” said Dennis Nixon, professor emeritus at the University of Rhode Island and former director of the Rhode Island Sea Grant. “The language suggested by Mr McKenney is a useful addition to the discussion here – it is about the right to pass, within reasonable and recognizable areas.”

The only refusal came from Representative Terri Cortvriend, a Democrat representing Portsmouth and Middletown who is the chairman of the commission. How could people fish if they had to keep moving?

McKenney said he didn’t think people should keep moving if they were fishing.

“I think a lot of the time when you struggle it’s people who think they can do whatever they want there,” McKenney said.

The commission will then meet in early March.

McKenney said in an interview that he felt the commission was doing a good job balancing private rights with public access. People on both sides can try to take too much, whether it’s the owner harassing passersby or the passerby who’s basically on someone’s porch.

“Every right that we refer to, the Bill of Rights, anything that has been considered a right, has certain limitations,” McKenney said. “Usually those boundaries kick in when they impact someone else.”

But seaweed collector Scott Keeley isn’t the only one worried about the direction the commission is headed. Jim Bedell, a longtime campaigner, called the paragraph banning chairs and tents “more than inappropriate”. Recreation is also protected, Bedell said.

And Anthony Palazzolo, who is from Rhode Island and followed the commission, said after watching the last meeting, “It doesn’t increase public access, it limits it.”

For Palazzolo, the commission would be making a serious mistake if it did everything possible to say what the constitutional rights of the people were doing do not include. Unlike Keeley, Palazzolo isn’t sure there is a constitutional right to set up a chair and lounge along the shore, sunbathing for hours on end.

But “I know that potential constitutional rights should not be seized by the state legislature. They should be dealt with on a case-by-case basis, by the courts,” Palazzolo said.

Ben Weber, a Westerly resident and shoreline activist, is following the meetings with growing concern. Access to the shore, he said, is not limited to simple crossing.