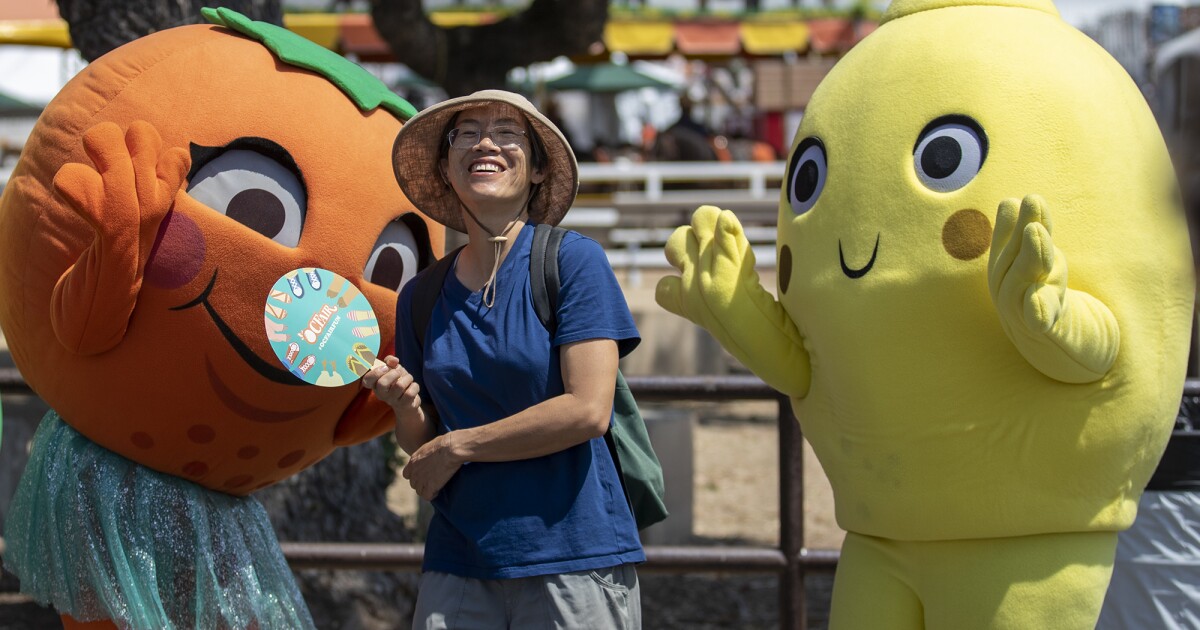 Thousands of happy spectators lined up early for the chance to ‘feel the sun’, like the 2022 Orange County Fair kicked off Friday morning at the Costa Mesa Fairgrounds.

Leading guests, like Santa Ana resident Eva Cruz, arrived more than an hour before the 11 a.m. opening, just to be there when fair organizers called a countdown and opened the Blue Gate entrance to a flood of visitors.

Cruz was there with his son Angel, 19, and daughters Alicia, 17, and Alondra, 12, to continue a family tradition that was temporarily interrupted two years ago by yet another COVID-19 pandemic. but was back in full swing on Friday.

“My favorite part is getting on the rides, seeing the animals, and walking around,” she said. “We were very sad when it closed.”

The family arrived at the fairgrounds around 9:30 a.m. to secure a spot at the front of the line, where some last-minute planners were still trying to pre-order tickets online on their cellphones (a contactless practice adopted when changing last year show that the organizers have chosen to keep).

Angel Cruz was loaded with a picnic package, a nod to cost consciousness.

“It’s a bit pricey, so we brought our own lunch, sandwiches and fries for the kids,” he said.

With the doors open, throngs of people poured in to receive a full welcome from a motorcade of fair employees, local dignitaries, members of the Clown Patrol and the OC Fair Foodies – a costumed troupe of culinary characters whose presence lends an agricultural feel to the festivities.

New this year is Sunny the Lemon, a mascot whose name and beaming yellow face fit perfectly with this year’s fair theme, “Feel the Sunshine,” according to Michele Richards, General Manager of OC Fair & Event Center. .

Sunny joins Strawberry Jan, Cornelius the Corn, Olivia the Orange and Arturo the Churro and is the fair’s first gender neutral character.

“We thought Sunny might have her own identity,” Richards said. “Sunny is who Sunny chooses to be – authentically Sunny. Everyone is welcome here with open arms, and we want them to feel comfortable.

Doug LaBelle, current chairman of the OCFEC board of directors, who has toured fairs in his 12 years with the organization, helped roll back the door to welcome visitors.

In addition to the seasonal rides and attractions, LaBelle hopes guests will experience the site’s Centennial Farm and Heroes Hall Veterans Museum, two features that show off the work that the Fair & Event Center, operating as the 32nd District Agricultural Assn. of California, performs year-round.

“Come to the fair, enjoy and have fun,” he said. “Everything is perfect, and we couldn’t do it without Michele and his team.

Inside the gates, it didn’t take long for spectators to rush to their favorite corners of the 130-acre fairgrounds. The children of Club Kare in Arcadia, led by Councilman Tim Lunney, rushed to Patches – a gargantuan ox intended to teach children about cattle at work.

Nearby, 2-year-old twins Scarlett and Sabine Kauffman watched from their Patches double stroller serenely submit to the pets and brushstrokes on its velvety black side panel. A former 4-H project, the bull has since reached 2,400 pounds.

The twins’ mother, Newport Beach resident Stephanie Kaufman, brought the girls and their sister, Stella, along with mother Vicki Hernandez as part of a family tradition whose roots date back 68 years, when Hernandez came as a little girl. All three generations of women said seeing the animals was one of their favorite fairground activities.

“I also love shopping,” Hernandez said with a smile.

Halfway through, visitors were tempted by a rainbow of giant stuffed animals, fruits and popular cartoon characters to try their hand at carnival games and walk away with consolation prizes.

One exception was 15-year-old Joe Bullock of San Clemente, who awkwardly carried a giant Scooby Doo, evoking mastery of the Bottle Up game, where people have to bring a glass bottle upright using only a ring.

Well, mum Michelle Cannon clarifies, Joe didn’t win the prize himself – it was won by Cannon’s uncle, Rick Iida, who came to town for a family reunion and insisted that the family goes to the fair so he can try his hand at the job.

“It’s his favorite thing. He’s got one at home and he’s training, so he won,” Cannon said. “We’ll come back before we leave and get another one.”

Orange County Supervisor Katrina Foley came to opening day as one of many local dignitaries and as a resident of Costa Mesa. While there in an official capacity, she said she planned to return in the evening to hang out with husband Casey and socialize.

“It’s my tradition to come on the opening day of the fair and raise the flag,” she said. “It’s the kick off of the summer.”

Richards, who came to the OC Fair in 2002 and was hooked, wholeheartedly agrees.

“It’s like extending an invitation to the most fabulous party of the year and seeing so many people come out and know that we’ve made a difference and created a great experience,” she said.