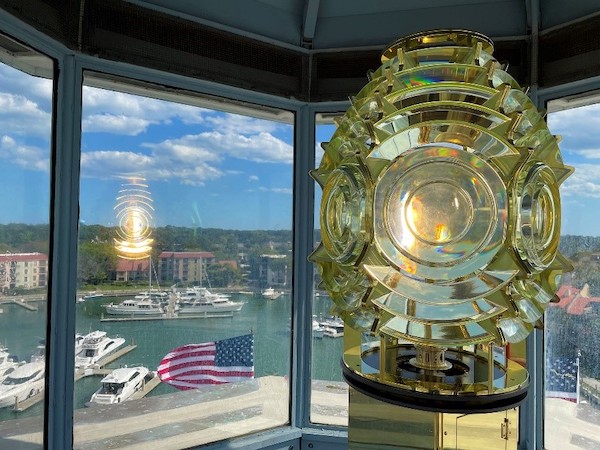 HILTON HEAD ISLAND, South Carolina – The iconic Harbor Town Lighthouse at Sea Pines Resort on Hilton Head Island has added an exciting chapter to its history with the installation of a real Fresnel lens to enhance the power of light that blooms from the high. Just over five decades old, the red-and-white-striped lighthouse — featured prominently in CBS’s coverage last month of the RBC Heritage PGA Tour golf tournament — not only serves as a beacon for the many ships that reside in the yacht basin, but also as an emblematic landmark of the region and the resort.

Developed in the 1820s for use in lighthouses, Fresnel (pronounced “fray-NEL”) lenses are not only stunning works of art, but their functionality has led them to be called “the invention that saved a million ships”. For visitors to the lighthouse, the 114-step journey to the observation deck now offers an added benefit.

“The Fresnel lens looks as good by day as it does when illuminated at night,” said Rob Bender, Director of Marine and Recreational Activities at Sea Pines Resort. “There is a lot of history associated with this lighthouse and this presented a great opportunity to add to it.”

Bender added that the installation of the Fresnel lens is a crowning achievement for The Sea Pines Resort and lighthouse keepers, property manager Mark King and keeper Nadia Wagner. “It’s a great partnership; it took a lot of patience, but it was worth it,” Bender said.

Discussions about introducing a Fresnel lens began nearly a decade ago, but Hurricane Matthew and other factors played a role in the delay. Final approval was even needed from the United States Coast Guard, a process that took just four months.

The new Lighthouse lens is a replica of the original fourth-order Fresnel lens created and designed by Dan Spinella, a Florida-based artist and engineer who began researching and restoring lenses 30 years ago. To date, Spinella said 46 reproduction Fresnel lenses have been made and installed in US lighthouses both as aids to navigation and as exhibits in lighthouse museums, such as Harbor Town.

At the time of its conception by French physicist Augustin Fresnel, the lens was hailed as a scientific marvel and revolutionized the way lighthouses illuminated the world’s waterways. With their intricate design of hundreds of prisms arranged in a beehive shape, Fresnel lenses are not only marvels of engineering, but also incredible works of art with a futuristic look even though they date back a long time ago. over 200 years.

The Harbor Town Lighthouse, which is open from 10 a.m. until sunset for daily tours, has many historical exhibits as well as a gift shop. Admission is $5.75 per person; children 5 and under are free.

Located on the southern tip of Hilton Head Island, the legendary Lowcountry destination features five miles of unspoiled beaches, 20 clay tennis courts, 14 miles of biking and walking trails, horseback riding, Eco-Adventures, water sports and the 605-acre Sea Pines Forest Preserve filled with wildflowers, wetlands and over 130 species of birds. As the first eco-planned destination in the United States, the Sea Pines Resort has become the model for many beach developments across the country. Guests can choose from a range of accommodations, including 300 villas, 100 rental homes and the luxurious 60-room Inn & Club at Harbor Town, a Forbes four-star boutique hotel and member of the Preferred Hotel Group. The resort’s finest collection of golf courses, amenities, meeting rooms and accommodations make Sea Pines one of America’s most sought-after leisure and group destinations.