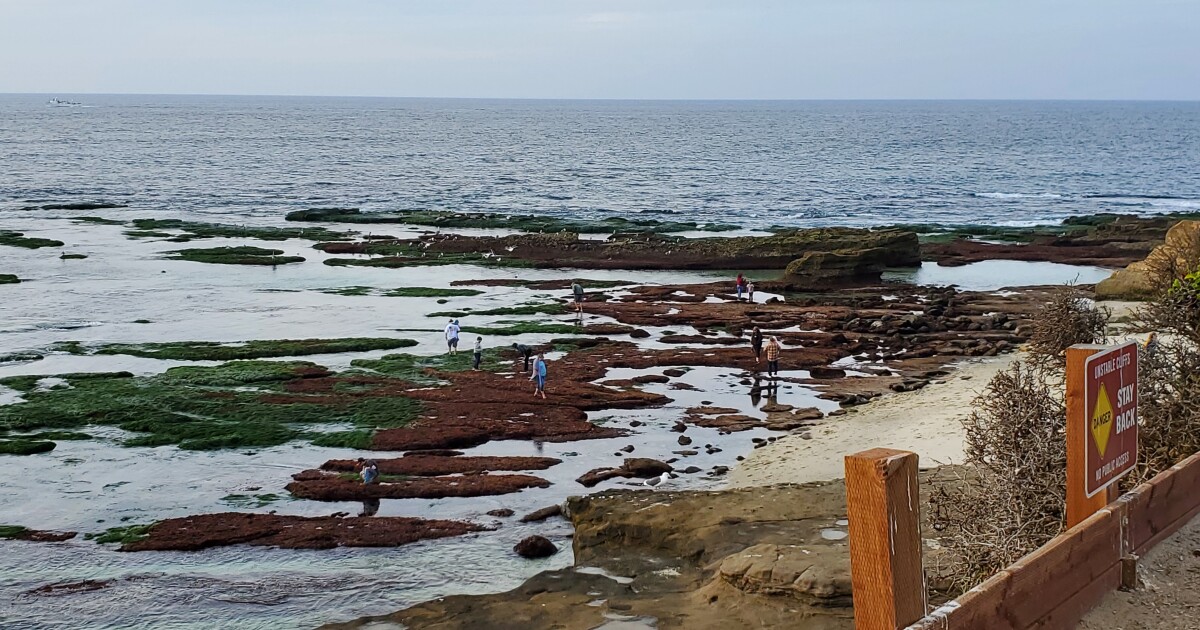 La Jolla is undoubtedly a historic community, with enduring buildings and landmarks that predate the theory of relativity and the airplane.

Even the coastline is steeped in history. Some areas have fixtures funded by La Jolla philanthropist Ellen Browning Scripps that are steeped in local traditions. Some historical highlights have disappeared but remain in the local annals.

The La Jolla Historical Society has resumed the in-person walking tours, and the November 20 walk on a cloudy and windy day focused on the coastline. Led by historian Carol Olten, the 90-minute trip started from Wisteria Cottage, descended to Coast Boulevard and to Goldfish Point.

“People always ask ‘What’s so great about La Jolla?’ and you get responses like “I love the climate… I love the views and the neighborhood,” Olten said. “You have to think about why we have these things that make La Jolla wonderful for us, and the answer is the Pacific Ocean. We wouldn’t have an ocean view if we didn’t have the ocean. .We wouldn’t have beaches, we wouldn’t have caves and cultural landscape, so beaches are very important in La Jolla, they were certainly important in the beginning.

At the turn of the 20th century, Shell Beach was a place of scientific exploration.

“Shell collectors like Dr. Fred Baker… had a great interest in science. It was he who influenced [Ellen Browning Scripps and her brother] EW Scripps to found the Scripps Institution of Oceanography, ”said Olten.

“At the end of the 19th century and the beginning of the 20th century, people still had a lot of freedom in terms of what they did and to interact with the natural habitat,” she said, noting that La Jolla now has several non-harvest marine protected areas. . “A lot of algae, mollusks and other marine specimens had not been named or seen by humans, so they generated a lot of interest. Women were involved as shell collectors. … I think we are lucky in La Jolla to feel the consequences.

About 500 yards off Shell Beach, a “really interesting rock formation” was often photographed in the early 1900s. It was triangular and stood almost 40 feet high. As such, it became known as Cathedral Rock.

“It crashed in 1906 in a big winter storm,” Olten said. “You can’t see the remains of it today, but it was an important rock formation and a tourist attraction at the time.”

A visitor asked if it was a coincidence that he fell in the same year as the San Francisco earthquake, to which Olten replied that he “deserves an investigation”.

Other local landmarks along the way included the children’s pool, which was funded by Ellen Browning Scripps and built at 850 Coast Blvd. by a breakwater and stairs. It opened in 1931 to provide a wave-free shore for children.

The tour also included the coastal shade structures known as Lookouts, the high-rise building at 939 Coast Blvd., and the site of the 12-cottage artist colony known as the Green Dragon Colony which was built over 100 years ago and where the condominiums now stand.

Scripps Park, although named in honor of Ellen Browning Scripps, also has plaques recognizing others, from a former president to private citizens.

“There is a monument in the ground grateful… Abraham Lincoln,” said Olten. “The benches were donated by individuals in honor of a deceased person, and they have names.” She estimated that there were 24 plaques and monuments.

At La Jolla Cove, Olten discussed the landscape of the area and the gradual loss of the rock formation known as Alligator Head.

The final spot on the tour, Goldfish Point at the southern end of Coast Walk, is a lookout that stands on Sunny Jim Cave, one of the Seven Sea Caves nearby.

The creation of the Cave Store and the tours it offers is a project undertaken by Gustav Schulz, who in 1902 decides to earn some money by charging tourists to come down and look at the cave. He dug out and created a staircase structure leading from Goldfish Point to the sea.

“It became an instant tourist attraction and continues to this day,” said Olten.

The name “Sunny Jim” comes from a cartoon character used as a marketing tool for the Force grain company in 1902. The story goes that author L. Frank Baum came here in the summer of 1905 after publication. of his “The Wonderful Wizard of Oz”. and got to know Schulz. He told her that it would be a good idea to give the cave a name.

“The figure you see inside the cave looks like the cartoon character known as Sunny Jim,” Olten said. The name stuck.

During Baum’s time here, he wrote books inspired by what he saw in La Jolla. One of them, “The Fairies of the Sea”, tells the story of a ship captain and a young girl who set off in a boat to the ocean. They find a set of sea caves, where a mermaid appears and invites them to her underwater fairyland.

“By miraculous means… they are able to see his kingdom,” Olten said. “The kingdom is in trouble, so the old man and the maiden help the sea fairy get rid of the wicked and have a beautiful kingdom again. The two leave the kingdom, row back, exit the cave, and return home for dinner. That’s a beautiful story.

The last walking tour of the year is full, but plans are underway for walks in 2022. To learn more about La Jolla Historical Society’s programs and next year’s tours, visit lajollahistory.org.