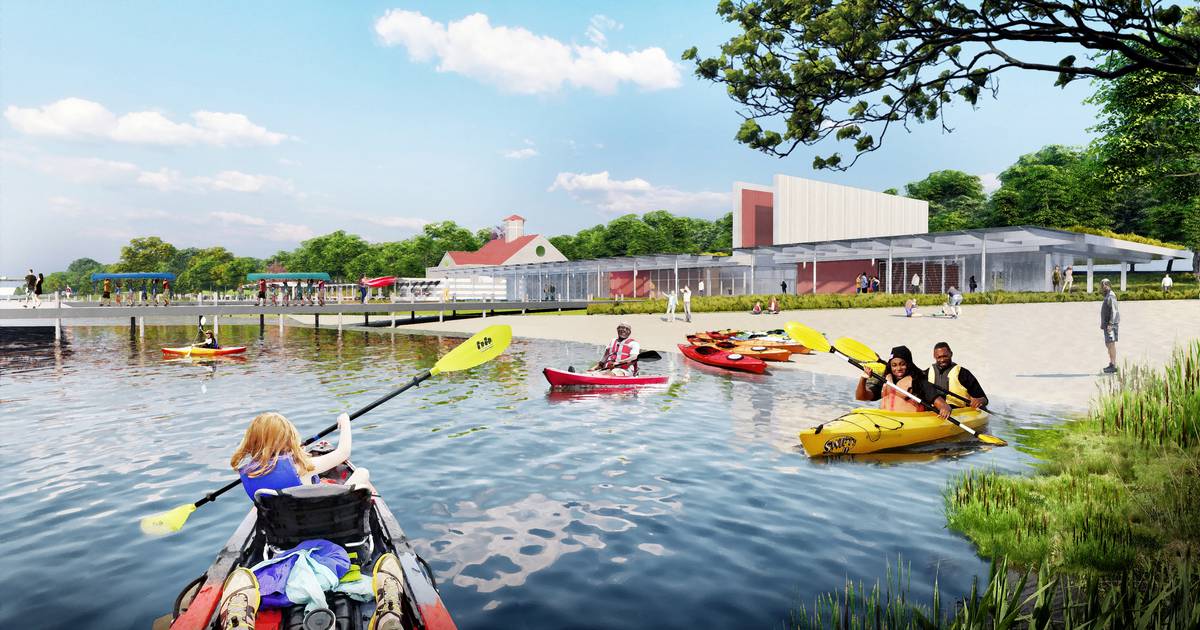 Take a spin around the Baltimore Central Branch and from most vantage points it’s hard to see the possibility.

The South Baltimore Waterway has 11 miles of shoreline, but views of the river are mostly obscured. Access is also severely limited. Busy roads, most without sidewalks or safe passages, sharply separate the waterway from the inhabitants closest to the city. Piles of debris mark the water’s edge as trucks zoom down the highways.

The ethos surrounding the Middle Branch is not new. For generations, the land surrounding the waterway was considered some of Baltimore’s least desirable — a historic dumping ground for the city’s trash, industrial waste, dead and, even worse, its living.

In the eyes of the team at Reimagine Middle Branch, however, the long-neglected coastline holds enormous potential. This year, the public got their first glimpse of a preliminary vision offering aquatic recreation, renewed wetlands, waterfront festival space – and a new transportation network to connect residents to the shore.

Now planners want input from residents who for decades have been largely mute in the planning process.

“We’re coming back to you to see if we’re doing it right,” Ethan Cohen told community members who viewed the plan virtually earlier this year. Cohen, who works for Mayor Brandon Scott’s office, is part of a network of organizers involved in the project.

The history of the region surrounding the Middle Branch and its people is one of environmental neglect, short-sighted planning and racism. Geographically isolated and dominated by industry, the region, which wraps around an inlet connecting Gwynns Falls and the Patapsco River, is slow to settle. Instead, it was a favored disposal site – construction debris was dumped in an unlined landfill on Reedbird Island, as were ashes from the nearby Reedbird incinerator, according to Hidden Middle Branch, a study by Maura Roth-Gormley.

From 1872 to 1948, Baltimore buried its dead along the Middle Branch – especially the poor, unclaimed, and unidentified. A potter’s field at Cherry Hill, now the site of Carter G. Woodson School Fields, was the final resting place of the bodies, four abreast in trenches. The tomb was a frequent target of vandals, according to a 1908 Sun story.

The tombs’ poor reputation and abundance of pollution in the area were cited by the NAACP and the Urban League as they challenged a planned public housing development for African Americans in Cherry Hill in the 1940s, notes the study. Desperate for wartime but racially segregated housing, city officials approved a black-only development for the area after white residents repeatedly protested potential sites elsewhere in the city, according to research from the ACLU of Maryland and Sun archives.

“It’s no accident that our communities are cut off from water,” said Brad Rogers, executive director of the South Baltimore Gateway Partnership, which receives a share of casino revenue, invests it in surrounding neighborhoods and is partner of Reimagine Middle Branch. .

“We’ve spent generations cutting off communities, especially African American communities, from their water,” Rogers said. “We achieved this by building highways, installing incinerators and dumping grounds. The job of this is to undo the history of environmental injustice.

State, local, and federal authorities have made efforts to repair the damage inflicted on the middle branch and its people. Reedbird’s incinerator was demolished in the 1970s and the landfill on the island was restored. A reed swamp has again grown in the area, though trash remains buried below.

A Superfund site near Westport has been remediated. Public housing in Cherry Hill and Westport have been closed in hopes of reducing overcrowding.

But major obstacles remain. The transport corridors around the intermediate branch are wide, fast and difficult for pedestrians to navigate. Existing amenities like Middle Branch Park are not connected to residential areas. Water access points remain limited and uninviting.

The preliminary plan for Reimagine Middle Branch, created by consulting team James Corner Field Operations, revolves around an overhaul of the transportation system around Middle Branch. The plan calls for the transformation of the twin Hanover and Potee Street bridges over the Patapsco with wider sidewalks, space for trails and fishing lookouts.

The Hanover Street Bridge would have its lanes reduced to make it safer for bicycles and pedestrians. Traffic at the foot of the bridge would be rerouted to expand Middle Branch Park and create a “green walkway” to southern Baltimore.

An extensive network of trails would connect neighborhoods to riverside amenities. A new African American Heritage Trail would link areas such as the Old Potter’s Ground and the former Black Sox Stadium in Westport – one of three Negro League Baseball spots played along the Middle Branch .

Coastal developments are also planned for improvement. Middle Branch Park would be expanded and improved. Wetlands would be added to alleviate flooding issues, along with spaces for festivals and small gatherings. A hilltop playground would have slides built into the hilly landscape of the park. The park’s lawn would be regraded to provide better visibility of downtown Baltimore.

The boathouse to the west of the park would provide more boat storage, and the designers envision a market there with local food vendors. A sandy beach is provided next to the boathouse for boat and canoe access.

Swamps would be fortified along much of the 11-mile coastline, including improvements near Brooklyn and Curtis Bay to prevent flooding. Reedbird Island would be open to the public for the first time.

The restored wetlands would also extend north to Ridgely’s Cove, where Gwynns Falls meets the Middle Branch. Planners hope to build a pedestrian bridge linking Black Sox Park and Swann Park. Ideally, officials hope to connect to a historic swing bridge in the area, creating a destination point for visitors.

Swann Park, currently tucked under the suspended junction of Interstates 95 and 395, would be redeveloped with a beach and kayak rentals. A promenade would extend north towards Pigtown and Sharp-Leadenhall.

The plan is certainly ambitious – and long-term. Reimagine Middle Branch officials say the implementation is a 20-year project.

But some pieces are in progress. Middle Branch’s new fitness and wellness center is slated to open this summer. The design process began to improve and build pathways connecting the center to surrounding neighborhoods. A wetland project at the mouth of the Patapsco River is also in the design stage.

Funding sources for the larger plan are being worked out, but will likely involve public and private funding. A cost estimator is working on the project, said Megan Born, senior associate at James Corner Field Operations. A final plan is to be announced June 4 at a public event in South Baltimore.

Until then, planners will continue to gather feedback. The preliminary design is the result of numerous community surveys and interviews with area residents.

At a community meeting in February, the reaction was optimistic. Cherry Hill Community Development Corporation board member Richard Partlow, who grew up in Cherry Hill, called it “super exciting.”

“I think it’s a wonderful thing that people in this community can use this water for recreational activities,” he said, recalling a time when he was able to swim in the middle branch.

Partlow said he was excited to see the proposed trail system connecting the neighborhoods.

“Maybe one day I’ll have a bike and I can ride through these communities and see a lot of these parks that I didn’t know had names,” he said.

Malika Brown said she was taken by the “newness” of the shot and saw “the real white sand on our side of the border”.

Days of the week

Keep up to date with Maryland politics, elections and important decisions made by federal, state and local authorities.

Brown said she hopes to see officials follow the design with programming.

“What’s missing are programs in the communities,” she said. “So the children can know how to canoe, how to row, know what an oar is.”

Residents were most excited about the improved connectivity and environmental restoration, Born said, but they were also skeptical. Many wondered if the plans would materialize, she said. Others worried about gentrification and displacement. These are challenges that planners face, she said.

“There is a very understandable and real threat that communities in Baltimore see,” she said. “[People ask] ” It is for us ? It’s our job to make sure it’s for them.

Planners hope some of the projects currently underway will help residents feel the plans aren’t a fantasy.

“It’s really important that we break the assumption that positive change in Baltimore can only happen for big development projects,” Rogers said.