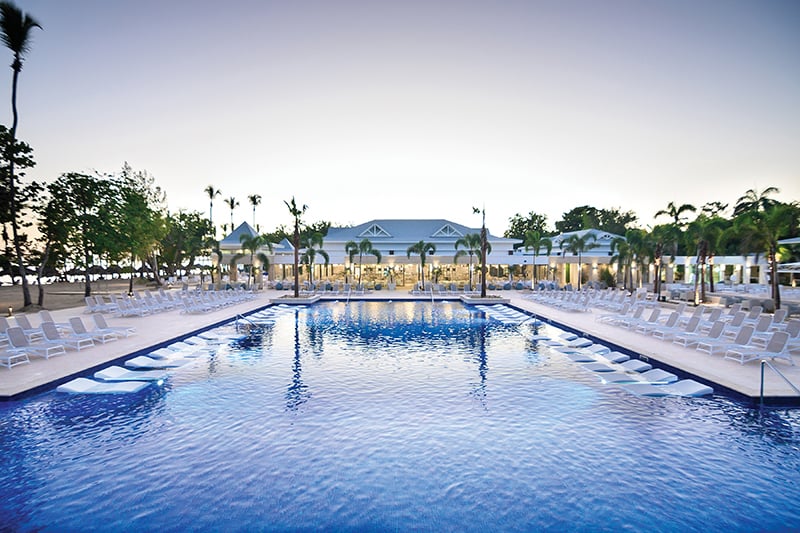 On the way along the winding, mountainous road to Samaná El Catey International Airport, a surprise emerges from the rainforest: an all-Hollywood production, complete with towering lights and equipment trucks. It only takes 20 minutes to get to my destination, the all inclusive resort Bahia Principe Grand El Portillowhere an attendant tells me that Brad Pitt and Sandra Bullock are on the Dominican peninsula for the jungle adventure movie The lost city. The film crew invested a few hundred rooms in the complex, as well as a restaurant transformed into a temporary production office.

“Are the stars staying here too?” I ask.

“Oh, no,” she laughs. “No one knows where they are staying.”

I briefly feel inclined to solve this mystery during my three-night stay at Grand El Portillo. Then I remember I’m not here as a paparazzo. I’m an honest-to-god journalist here to experience Charlotte’s last nonstop destination, Samaná, Dominican Republic. Plus, an honest-to-God shack bar serves honest-to-God piña coladas just steps from my room.

Airlines have been offering nonstop flights from CLT to the Dominican cities of Santo Domingo and Punta Cana for years. Until recently, Samaná was a destination for wealthy European and Canadian tourists. But it’s also become popular for Americans; thousands of tourists flock to the shores in winter and spring to watch humpback whales during their breeding season.

Many large Samaná resorts have opened in recent years, and the peninsula is gaining new nonstop airports like CLT. (To clear up any confusion in your Google searches: Samaná is the name of a peninsula, a province within that peninsula, and a city within that province. For the sake of clarity, I will refer to the entire peninsula.) well traveled places, Samaná is known for its undeveloped jungle terrain. On his first voyage to the Americas, Christopher Columbus described the lush tropical landscape as “the most beautiful land on the face of the earth”. To date, Samaná is the main producer of coconuts in the DR

When you stay at a resort, you usually get to know your bartender better than the country you’re in. Yet one of the resort’s best attributes is its evocation of its surroundings. Flamboyant flowers, West Indian cedars and the lush green of the region’s palms fill the villas and driveways. Miniature cabanas, spaced out for more privacy, line the beach at the back of the property; Stand at its center and look in any direction, and you’re in for an Instagram-worthy cinematic attraction. (Which I suspect is why Pitt, Bullock, and others are in town.) As you walk the trails, you might come across a Buddhist-style Zen garden, a private wooden enclosure hidden by palm trees, or, most welcome, a cabana with a full bar that you haven’t encountered before.

Grand El Portillo reopened in 2021 after an eight-figure upgrade during a COVID shutdown. His “renovation concept” is called “Mirror of the Sea”, inspired by the coastal towns scattered throughout the region. Bahia Principe has properties more suited to romantic getaways; this one aims to pamper visitors of all ages and interests with six restaurants, two pools, a water park, spas, a sports bar, and separate, staff-monitored hangouts for kids and teens. The breakfast and lunch buffet, El Limón, reflects this mix of familiarity for American visitors and local options for adventurous tourists, with mashed plantains and American-style waffles.

Still, there are plenty of opportunities to see Samaná outside of a resort. The balance between comfort and adventure is up to you. 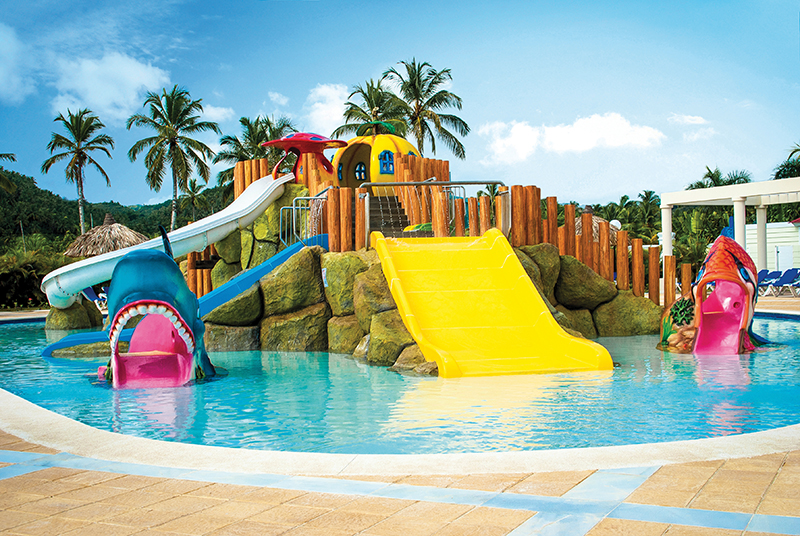 The teen lounge (below) and water park (above) are just a few of the features for younger visitors at the family-friendly Bahia Principe Grand El Portillo. Courtesy of Bahia Principe Hotels & Resorts. 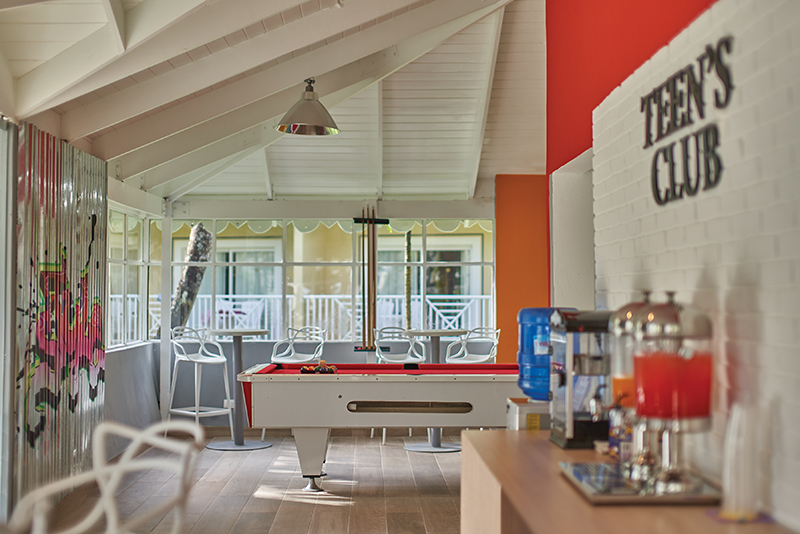 Rooms at Bahia Principe Grand El Portillo are simplistic and spacious, in keeping with its family friendliness. (The hillside Bahia Principe Luxury Samana, with its oceanfront balconies, bathrobes and slippers, and 24-hour room service, is the most romantic adults-only experience. This resort is about an hour away, on the south side of Samaná.) Activities like yoga on the beach, dance lessons, and arcade games keep the family atmosphere going throughout the day; lively bars, live shows, and dancing give the night a more mature appeal. But don’t worry: the bars are open all day. 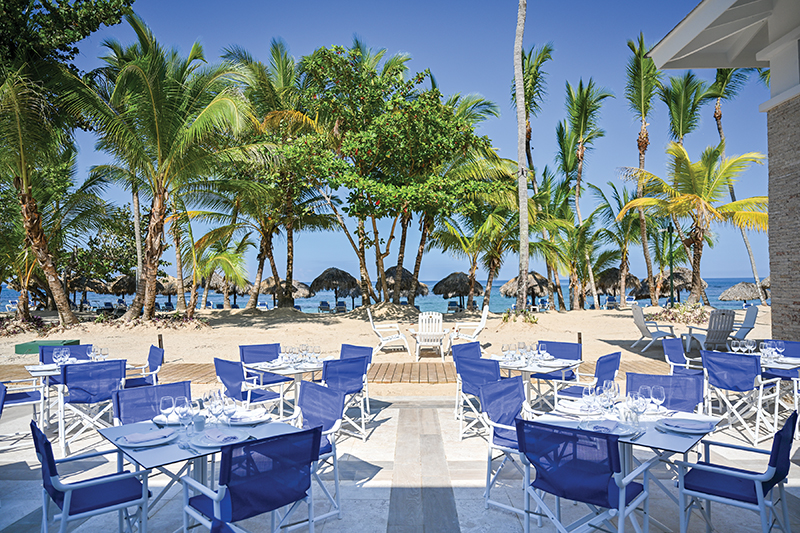 We’ve touched on buffets, but the Bahia Principe Grand El Portillo also offers a variety of non-buffet dining options. The menus to Greek and The fish market offer different flavors of the ocean. Boa Vista, a Brazilian-style rodízio, serves grilled meat at the table. A personal favorite: Portofino (not to be confused with Charlotte’s Italian restaurants) makes pasta bolognese particularly addictive. 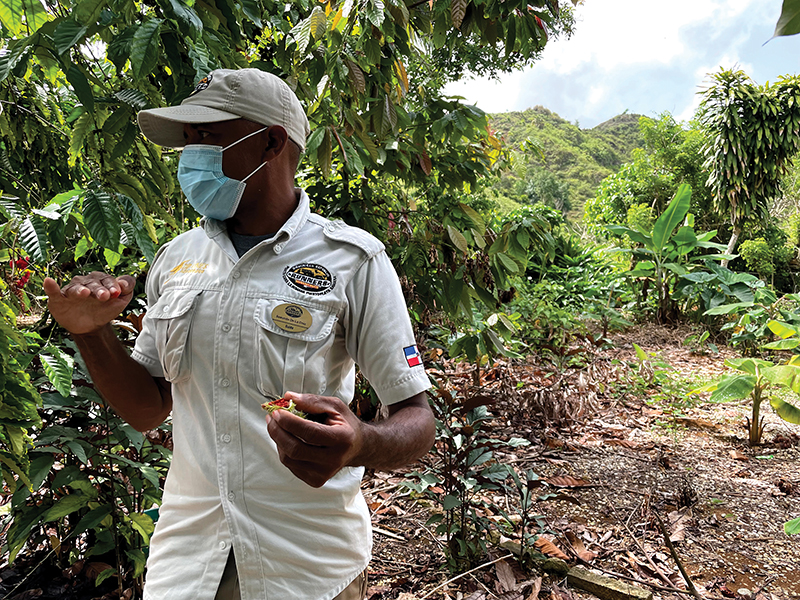 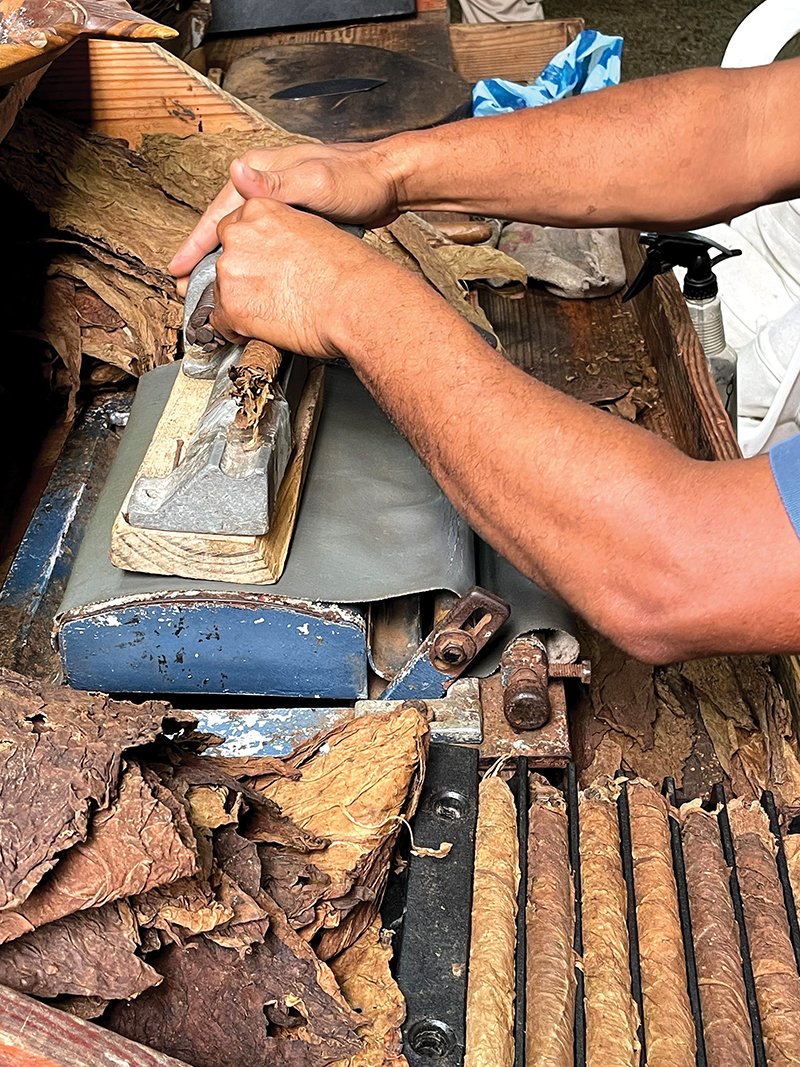 At the top of the mountainous region of Rancho Español in Samaná, the Las Ballena Cigars manufactures hundreds of artisanal cigars every day. Owner Roel Vosters, originally from Belgium, came to the Dominican Republic as an exchange student over a decade ago before deciding to return and enter the industry. The DR produces three times as many cigars as Cuba, and several are among the highest rated in the world.

Las Ballenas is one of many stops on tours guided by Runner Adventures, which takes visitors to a Dominican farm that produces indigenous fruit, coffee and chocolate; a rubber plantation; and in nearby towns. Other Runners Adventures tours: “Monkeyland,” a 5-acre attraction with monkeys and other native animals; a zip line trip; a waterfall survey; and a horseback ride.