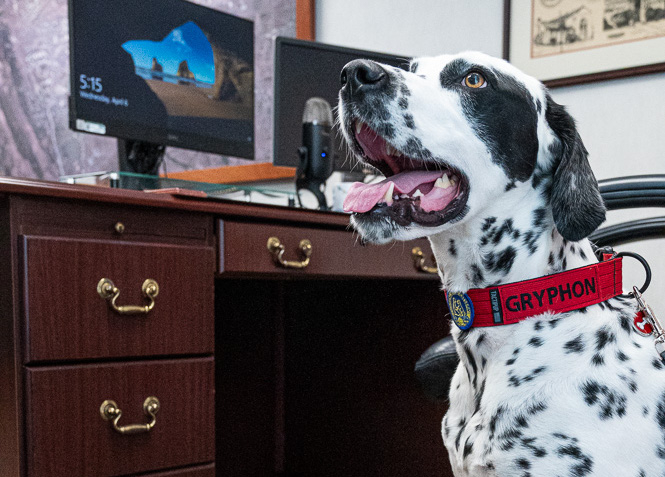 If you’ve ever been to Peet’s Coffee in downtown Pleasanton, you may have seen Gryphon Benn socializing with his friends. But, Gryphon is no ordinary 3-year-old; He’s a gorgeous 75-pound Dalmatian with a patch of black fur over his left eye who meets his dog pals every Monday for “coffeedog.”

“Gryphon is very friendly and enjoys meeting children, adults and other dogs,” owner Kathy Benn said. “When we sit at Peet’s on Main Street, people are drawn to him and excited to interact with him.”

Since last week, Gryphon has become more than “the most affectionate and cuddly dog” the Benns have ever had. He is now Pleasanton’s 2022 Ambassador, an honorary title auctioned off at the Valley Humane Society’s (VHS) annual Tails at Twilight gala last October.

Gryphon, surrounded by his human family, received his official title at the April 19 town council meeting.

“The Valley Humane Society has been saving animal lives and supporting our community for over 30 years, so we’re thrilled to have the town join them in recognizing the Pleasanton Ambassadog,” said Deputy Town Manager Pamela Ott. , in a press release.

“Having an Official Canine Representative showcases our dog-friendly community, while recognizing a valuable local non-profit organization and its efforts to save and improve the lives of Tri-Valley pets,” Ott added.

Gryphon is the fourth Ambassador in the city’s history, after Red Haas, Amber Hall and Jeffrey Williams.

Over the next year, he and his family will take part in a number of events, take part in a Tri-Valley Community Television interview and have a place of honor in the annual Pleasanton Holiday Parade.

“Gryphon will participate in as many dog-friendly activities as possible,” Benn said. “I would like him to attend as many Valley Humane Society programs as possible.”

Benn said that when Gryphon isn’t fulfilling his duties as Ambassador, he’ll spend his days running and chasing balls on the beach when he visits Benn’s grandkids in Monterey, cuddles on the couch and chases after his specialized training.

“He has taken several obedience classes and has his Canine Good Citizen certification through (the American Kennel Club). He is currently enrolled in a tricks class,” Benn added, noting that Gryphon hopes to become a pet therapy dog ​​in the near future and working with children in the Valley Humane Canine Comfort Paws to Read program.

At home with the Benns, Gryphon is the younger brother of Bella, a 15-year-old Puggle, and Zazzles, a 7-year-old feline.

“Gryphon is like one of our children… (Our pets) bring us so much love and joy,” Benn said. “By doing this for him, we’ve also helped many more animals and families.”