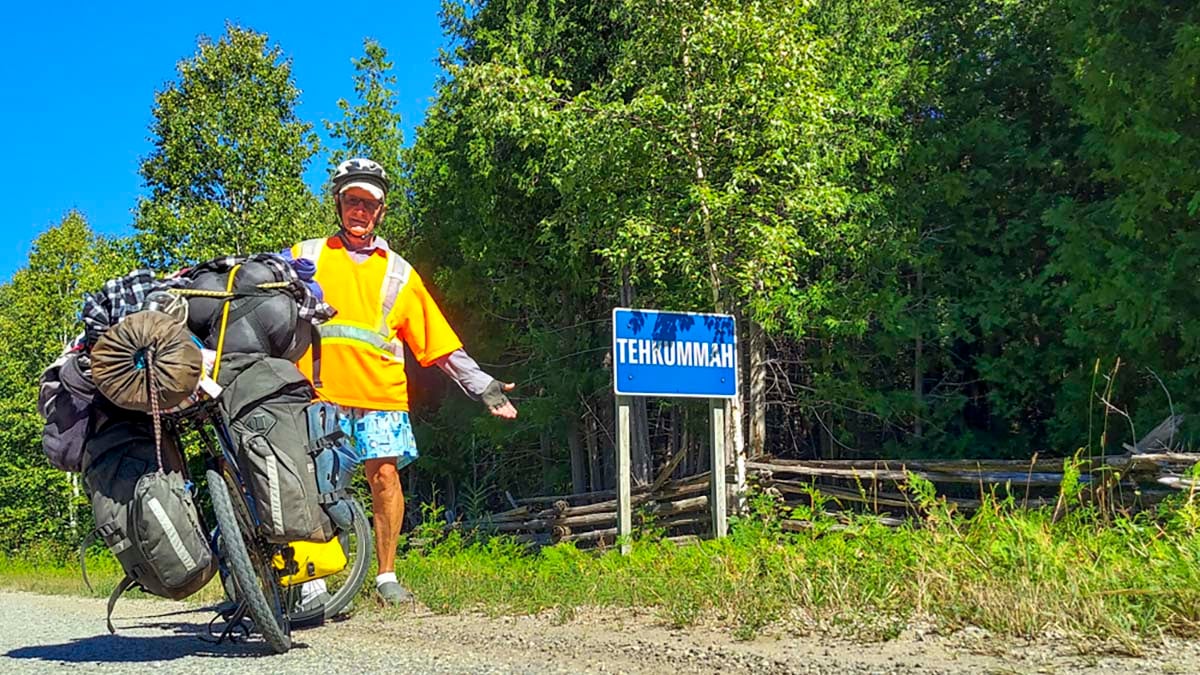 MANITOULIN ISLAND—Myeloma cancer is usually incurable, but cyclist and cancer survivor Andy Sninsky of Newport Beach, Calif., went against the grain. In 2008, he was diagnosed with myeloma, third on the list of cancer deaths. Mr. Sninsky recently spent a week on Manitoulin Island, biking to raise awareness and funds for Myeloma Canada.

Myeloma attacks the body in a variety of ways, but Mr. Sninsky’s affected his blood and bones. His expected lifespan at the time of diagnosis was three to four years. When he was first diagnosed, Mr Sninsky was living in Austria with his then wife. He underwent his first radiotherapy treatments in 2008, followed by four cycles of chemotherapy, in Vienna. In total, Mr. Sninsky underwent 15 episodes of radiation therapy, eight months of chemotherapy and a stem cell transplant.

After radiation therapy, when he couldn’t climb stairs, his wife managed to get him into Heiligenkreuz Abbey, a monastery in the woods of Vienna. “I was at the monastery for 16 days with a large group of Cistercian monks who were praying and chanting in front of you,” Mr Sninsky said. “They adopted me as their miracle and so far so good.”

The stem cell transplant took place in 2009. After that Mr. Sninsky used a walker with a wheelchair and after that a Nordic walking stick. “I used to be 5ft 11in, but now I’m 5ft 6in, because of the bone damage I had,” he said.

From 2008 to 2010, Mr. Sninsky was in a lot of pain and took many medications to relieve this pain. At that time, Mr. Sninsky and his wife were no longer married. “We are still friends,” he said. “But she had thyroid disease. Having two people with serious illnesses is hard on a relationship.

Eventually, his doctor told him he needed to be more active and exercise more. In 2010, Mr. Sninsky, on the advice of his doctor, took a bike and rode three blocks. “I was always outside,” he noted. “I was always busy. I thought I would live forever because of all the exercise I got, and I never smoked or drank.

He ended up calling an old friend from high school who rode a bike and convinced him to ride from Newport Beach to Arizona, a total of 350 miles. “I did it as an awareness run for a California-based group and graciously supported me with donations,” Mr. Sninsky said.

He feels he needs to give back to the community and now takes a bike trip every year for myeloma and blood cancer. “Myeloma is the third-leading cancer killer, behind breast cancer and lung cancer,” he continued. “Farmers understand. Steelworkers and those who work as coal miners also get myeloma cancer. It’s rare, but if you think you have the disease, see your doctor and see a specialist.

“When I was first diagnosed I was scared and my GP was fascinated,” he said. “I’m better than many. I don’t know why, but I have to wonder if it has something to do with monks in Austria.

Mr. Sninsky came to Canada last summer to support Myeloma Canada. The organization also organizes cancer awareness hikes. As part of this year’s ride, he had a “glorious” week in Manitoulin. “I loved every place I visited, from Meldrum Bay, Manitowaning, Mindemoya, Providence Bay, M’Chigeeng and all parts in between,” he said.

When he arrived in Gore Bay around 4 p.m. last Friday, Mary-Lea Buchan was handing out fresh vegetables to town workers. The RV campsite was still showing on Google Maps but had actually been canceled after one season. Mr. Sninsky asked the municipal office if there was anywhere he could camp in town and was told he could not camp in Gore Bay.

Mrs. Buchan told him, “I have a garden that we don’t use. You are more than welcome at my home with Bob and Mrs. Lilly Third. They are the friendliest and kindest people you will ever meet.

Gore Bay resident Tim MacTaggart, who was staying at Buchan’s hunting lodge, heard about Mr Sninsky’s ride and donated $100. In another case of support, a car slowly approached him as he drove down Poplar Road towards Providence Bay from Gore Bay. The driver asked if he was that rider, who was riding for cancer. “The man lives three doors down from Mary-Lea and he gave me $50 to do whatever I needed to do because his dad had died of cancer.”

Mr. Sninsky’s journey began along the northern shores of Lake Huron. Its route through Ontario will cover approximately 1,000 miles in total. He rides to support patients who may not be doing well and to support cancer research. All proceeds from his awareness hike will go to the International Myeloma Foundation and Myeloma Canada.

September is Blood Cancer Awareness Month, and Mr. Sninsky will complete his hike on September 16, which also happens to be his 74th birthday. His last stop is Ipperwash. From there he will return home.

“I’ve enjoyed my summer cycling across Canada immensely,” Sninsky said, noting that he doesn’t always drive, but drives too.

“I love the city and the views,” he added. “I went to the lighthouse. It’s a beautiful town and there is a wonderful feel to the shops and restaurants.

All of Manitoulin left Mr. Sninsky with positive feelings for the people and places he visited. One day he really hopes to come back, he said.

His message is not to give up. “There were times when I thought I was going to check it out, and it was an imminent possibility, but I managed to beat it, at least so far,” he said.

“This is my 14th year with this still incurable but manageable cancer. Some do better than me, and many don’t.