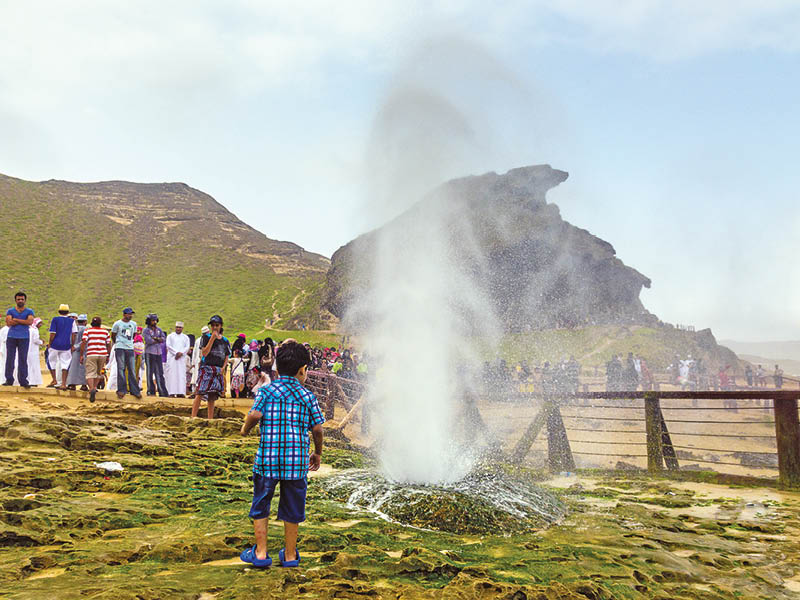 Muscat – The Ministry of Heritage and Tourism, in cooperation with Omran, will develop Salalah’s famous Mughsail Beach as part of its efforts to develop tourist sites and attract visitors from around the world.

Khalid Abdullah al Abri, Director General of Dhofar General Directorate of Heritage and Tourism, informed that he is part of several upcoming tourism projects which aim to make Dhofar Governorate a sustainable tourist destination throughout the year.

The project will be developed in two phases. “Phase 1 will include the construction of parking lots, a plaza to hold events and activities, food kiosks, restaurants, a walkway extending to the beach, gardens and shade. Phase 2 will focus on water sports, an adventure park and children’s games,” said Abri.

One of Dhofar’s most popular attractions, Mughsail Beach is famous for its blowholes. Seawater rushes through an underground high-pressure channel and gushes out of a geyser-like spout, rising several meters high.

In preparation for the khareef season, which officially begins on June 21 and ends on September 21, the Dhofar General Directorate of Heritage and Tourism recently organized a meeting with tourism partners from the public and private sectors.

Rawas Hafeez al Rawas, Deputy Director General for Heritage and Tourism in Dhofar, informed that promotional campaigns for the tourist season will be implemented in cooperation with airline offices and hotels. He said that hotel infrastructure and heritage sites are ready to receive tourists.

“Work is currently underway with airlines and hotels to implement a joint promotional campaign throughout the three-month khareef season,” he added.

According to Rawas, the ministry promotes the season by airing special reports on Dhofar through TV programs, as well as engaging Gulf and Arab influencers to promote the destination on social media.

Dhofar will also soon see the completion of the Al Hafa waterfront development, a tourism and recreation landmark in Salalah. The first phase of the project includes the opening of a waterfront promenade and restaurants (several international brands) and the limited operation of a traditional market.