Long Island Shark Attacks: A Timeline of the Growing Phenomenon 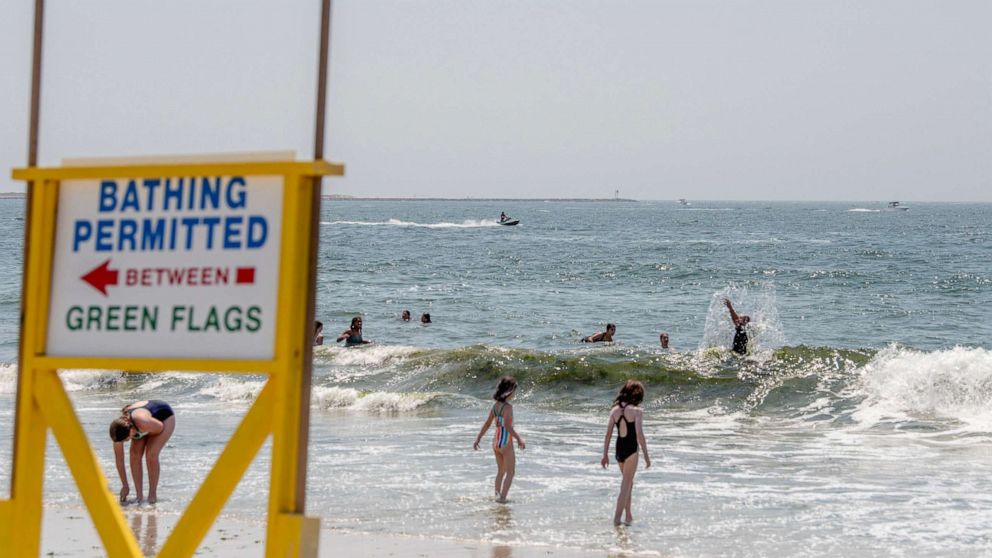 With five shark attacks off New York’s Long Island beaches in the past two weeks, swimmers may have to deal with the new normal of their presence.

Fortunately, none of the summer’s shark attacks turned deadly. Here’s a look at shark bites on Long Island beaches so far this summer.

The first shark bite of the season came when a 37-year-old swimmer was bitten on his right foot near Jones Beach.

The attack left the man with a laceration in his foot, officials said.

In a statement from the Nassau County Police Department, officials said they will increase beach patrols over the July 4 weekend.

At a July 1 press conference, Nassau County Executive Bruce Blakeman said patrols would include both boats and helicopters, and the county would also use drones over the water to get a better picture of the situation.

Days later, a lifeguard from Smith Point Beach became the second victim of a shark bite in the area.

Zachari Gallo, a special education teacher at Sayville High School, said he practiced with other lifeguards and pretended to be a drowning victim in the water as part of a drill.

“I felt a pressure in my hand, pulled it out and just started pounding, punching and connected with the shark three times, then the third time he spun,” said Gallo told ABC affiliate WABC.

He added that blood was “running” down his hand and arm, but he hadn’t realized he had also been bitten in the chest, saying adrenaline must have taken over his senses.

After Gallo landed his third punch, the shark moved away, but then started flipping its tail, he said.

It was then that Gallo knew he was dealing with a shark and rushed the rescuers close to him towards the shore.

Fortunately, there were no more bites during the training session and Gallo only needed two stitches and antibiotics for his injuries.

Smith Point and Cupsogue beaches were closed after Sunday’s attack and reopened at 10 a.m. Monday after lifeguards carried out an additional patrol in the waters.

That same week, another lifeguard was bitten near Ocean Beach on Fire Island.

The lifeguard was only about 150 to 200 yards from shore when the afternoon attack happened, officials said.

According to the Ocean Beach District Chief Lifeguard, the lifeguard was bitten on the ankle and suffered only minor injuries.

Earlier in the day, rescuers spotted a fin off Ocean Beach, officials said.

After the afternoon attack, the entire Fire Island Ocean District displayed purple flags in lookout areas and red flags in other swimming areas to report “dangerous marine life” activity. in accordance with City of Islip protocol.

Two separate shark attacks hit the same beach on Long Island less than a week after the incident on Fire Island.

The first came before lifeguards were on duty, around 7:45 a.m., when a surfer was bitten by a shark, officials said.

Officials believe the attack was carried out by a tiger shark, which left a 4-inch gash on the surfer’s leg.

After being knocked off his paddle board, officials said the surfer “took a punch” at the shark, which appeared to be coming back for another bite.

Fortunately, according to officials, a wave brought the surfer and his board back to shore before further damage was done.

A ranger helped the surfer back to shore and called 911, police said.

Just hours after the incident, Smith Point beach was reopened at 1 p.m.

Later that evening, a 49-year-old man from Arizona was bitten by a shark shortly after 6 p.m. at Seaview Beach, Suffolk police said.

The man “was standing in water up to his waist when a shark came from behind and bit him on the left wrist and buttocks,” police said in a statement.

The victim was able to get out of the water and was transported by Suffolk County Police helicopter to Stony Brook University Hospital with non-life-threatening injuries, police said.

Bellone said Wednesday’s incident is “an indication that what we’re looking at is something of a new normal.”

He added that the sharks seem to be closer to shore, which will continue to make interactions between them and humans more frequent.

“Fortunately, we haven’t seen any major injuries, and we’re not expecting that, but it’s something to be aware of and aware of,” Bellone said.

Bellone warned swimmers to stay out of the water when lifeguards are off duty, to avoid the water at dusk and dawn, not to wear shiny jewelry and not to enter the water in case of bleeding.

In recent weeks, officials have been monitoring beaches by boat, helicopter and drone to account for the upsurge in shark incidents off beaches in Nassau and Suffolk counties.

On July 10, Blakeman held a press conference on the beach, where he said it was relatively safe to go in the water, as long as you take precautions.

“If you’re going to the ocean, it’s good to go with a partner. Always go to a protected beach where there are lifeguards, always stay together and be aware of your surroundings,” he said. declared, even while wading through the water himself. . “If you do these things, you will be safe.”

For now, authorities will continue to conduct additional beach patrols, and beaches will remain open unless further sightings or incidents are reported.

There was only one shark bite report last summer, with a lifeguard bitten in July.

According to Long Island officials, there were 20 confirmed shark sightings off the island in 2021, a record for the region.

According to ABC News affiliate WABC, that number was three times higher than in 2020.

With five attacks and increasing sightings, this summer appears to be Long Island’s most shark-filled summer yet.