How to Experience the Best of Wildlife and Relaxation 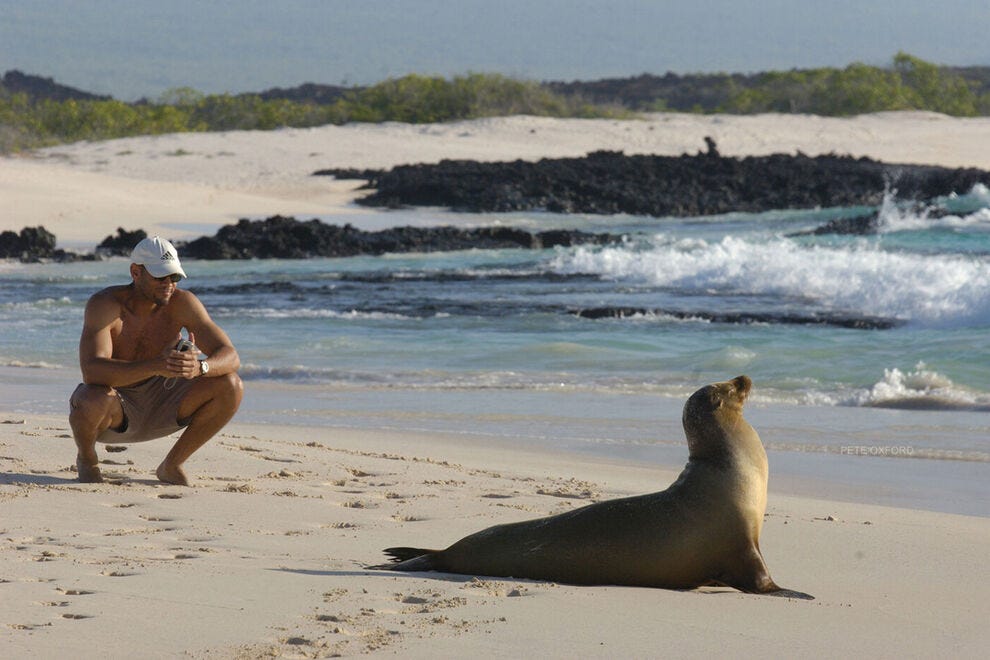 The Galapagos is both a marine wildlife lover’s dream as well as a photography, outdoor and nature paradise – a paradise that offers snorkeling in beautiful calm bays, the ocean or even cenotes (natural underground sinkholes filled with water).

Here you can swim with whale sharks, giant turtles or marine iguanas; hike through bizarre lava formations or along wild and dramatic beaches and coastlines; laze on the sandy beaches with the sea lions or take a cruise to some of the outer islands that have no accommodation or have many visitors. 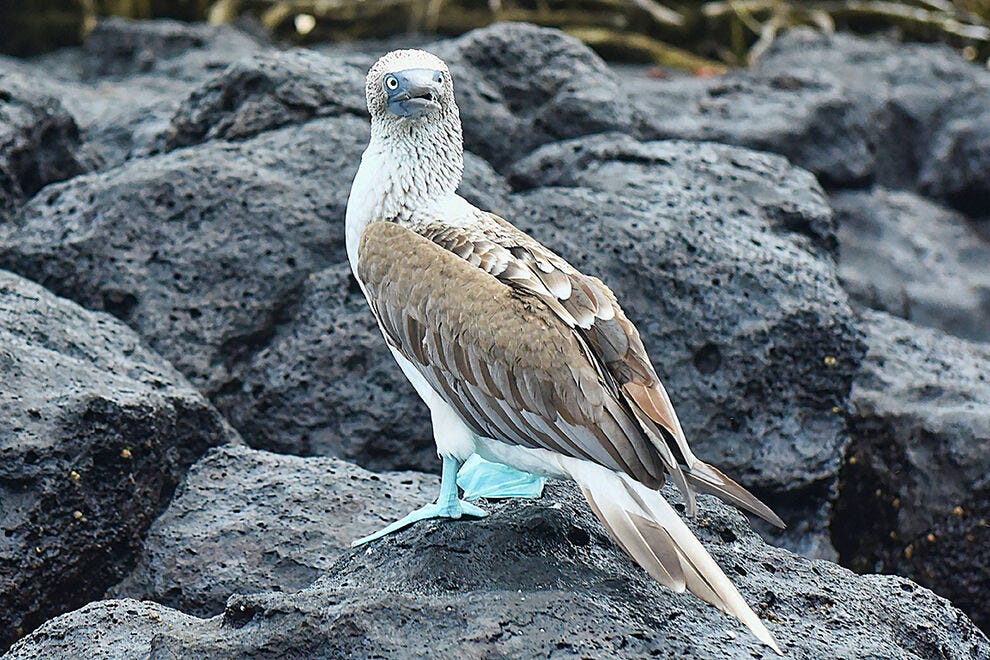 The vast array of wildlife here is unlike anywhere else. You have a large number of species endemic only to Galapagos, and since there have been almost no natural predators on the islands, the wildlife is incredibly tame and undisturbed by human visitation.

At the top of the list are blue-footed boobies, so named for the bright blue feet that the males proudly display in a fun dance reminiscent of a silly Monty Python walk, when trying to woo their female counterparts. You can see them with newly hatched chicks during breeding season on North Seymour Island, as well as spots on Isabela and Santa Cruz. 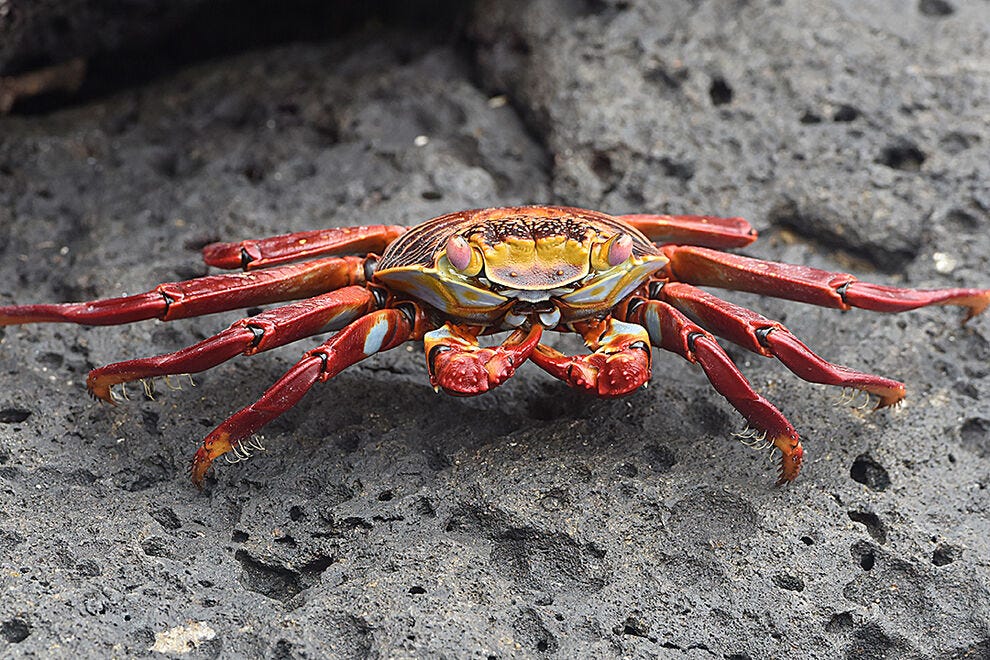 Marine life abounds in Galapagos. You’ll see Sally Lightfoot Crabs (supposedly named after a Caribbean dancer) on almost every block and coastal path. They eat the dead skin of marine iguanas and are known as the janitors of the food chain here, due to their scavenging tendencies and willingness to devour just about anything. Their brightly colored shells act as photo magnets against the black volcanic rock they tend to frequent. 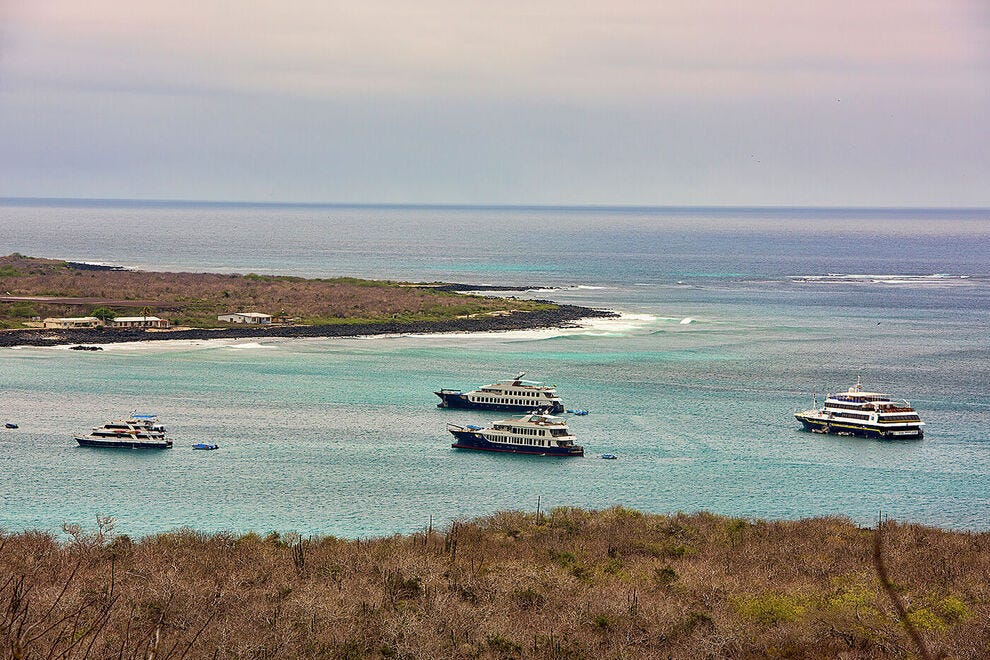 You can take an all-inclusive Galapagos cruise, where you’ll get personalized treatment and even have professional naturalists and guides with you throughout the day to make the most of your visit. Going on a cruise will also take you to some of the more remote islands, which don’t see as many visitors. There are three main islands (Santa Cruz, Isabela and San Cristobal) that have land based accommodation, so for the outer islands you have to live on board. 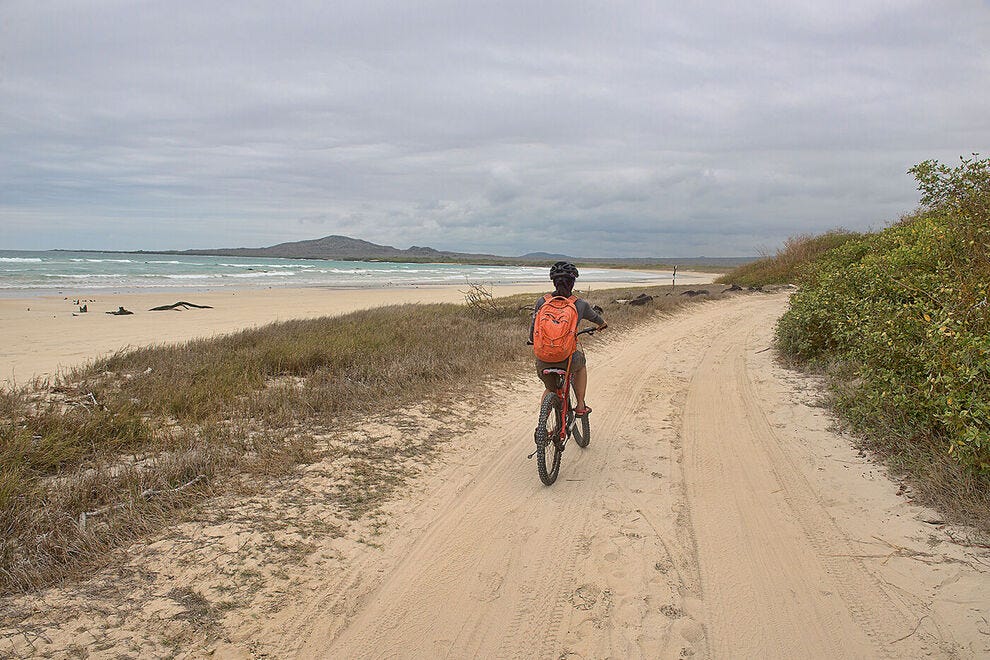 An island of your own: biking on Isla Santa Cruz

Alternatively, you can base yourself on land, save money by doing the land tours on your own without a schedule, still have time at the beach, and then choose your own day trips by boat to some of the islands. closer. However, you may not have a seat if the more popular tours (like North Seymour) are fully booked. Either way, there are miles of empty beaches to cycle through and hiking trails. Wildlife encounters will be epic no matter how you do it. 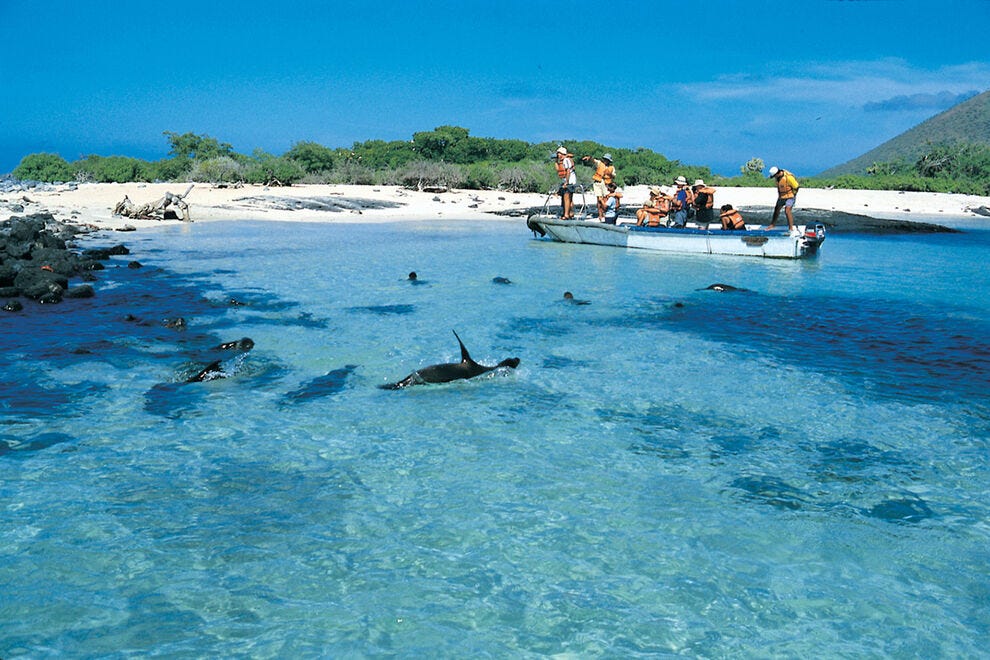 The tour will take you to the most pristine bays to snorkel and dive with sea lions, turtles and other abundant marine life. While parts of Galapagos can be cold and windy depending on the season (Galapagos has a wildly unique climate that is both tropical and semi-arid), you will always find white sand beaches and wonderful turquoise water reminiscent of the Caribbean. . 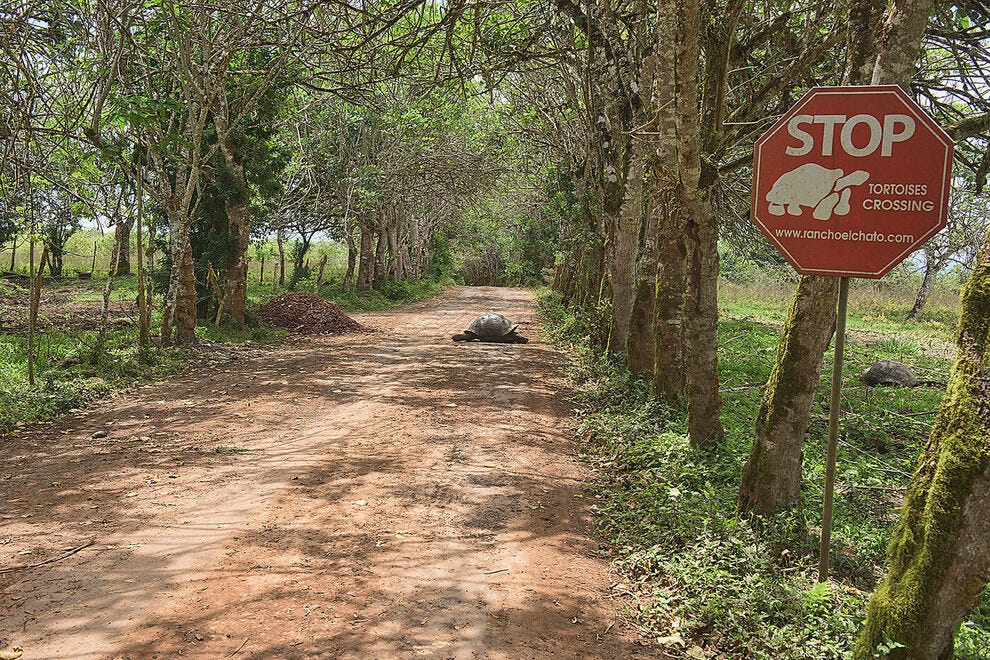 Galapagos giant tortoises rule the roost and top most visitors’ must-see wildlife lists. El Chato, a 12-hectare private reserve inside Santa Cruz Island, is open to the public and is where you can come face to face with the giant creatures in their natural habitat. Even better, the reserve can be reached by bike if you don’t want to visit on an excursion. Most tour operators also include El Chato as part of any itinerary. 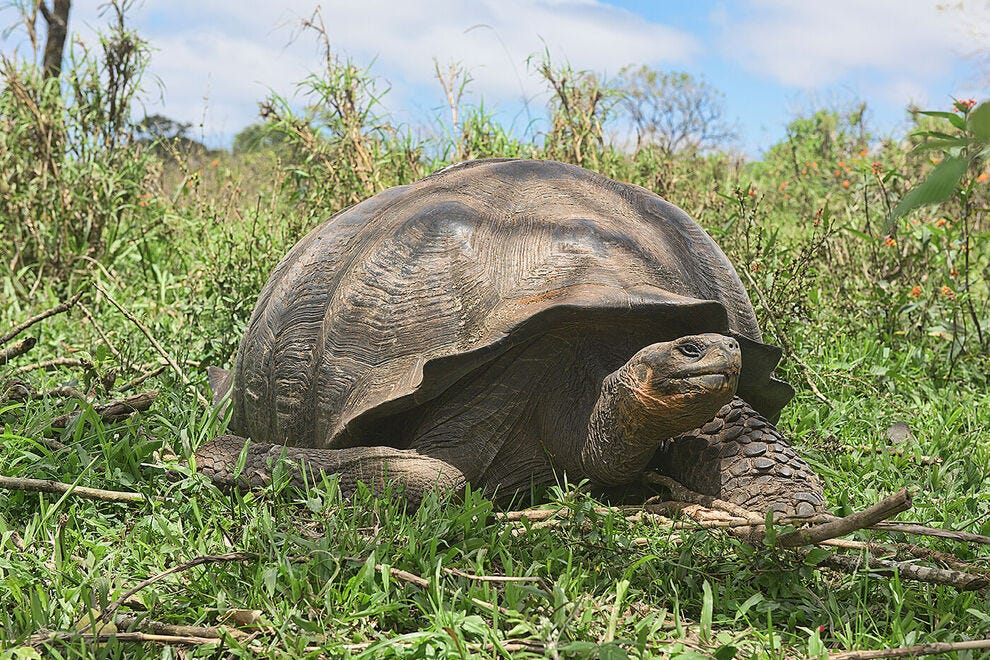 Turtles are the kings of the jungle in Galapagos

The largest Galapagos tortoises can weigh up to 1,000 pounds (although 400-500 is more the norm) and often live over 100 years. There are a dozen different surviving species, spread across ten islands in the archipelago. The turtles interact well with visitors and are quite comfortable with human presence, as especially in island reserves they have no predators to worry about.

You’ll even occasionally see one or two of Darwin’s famous species of finches riding the back of a turtle shell. The little birds have an interesting mutual relationship with the turtles, as they clean ticks and parasites from their skin, all in exchange for an easy, free meal. 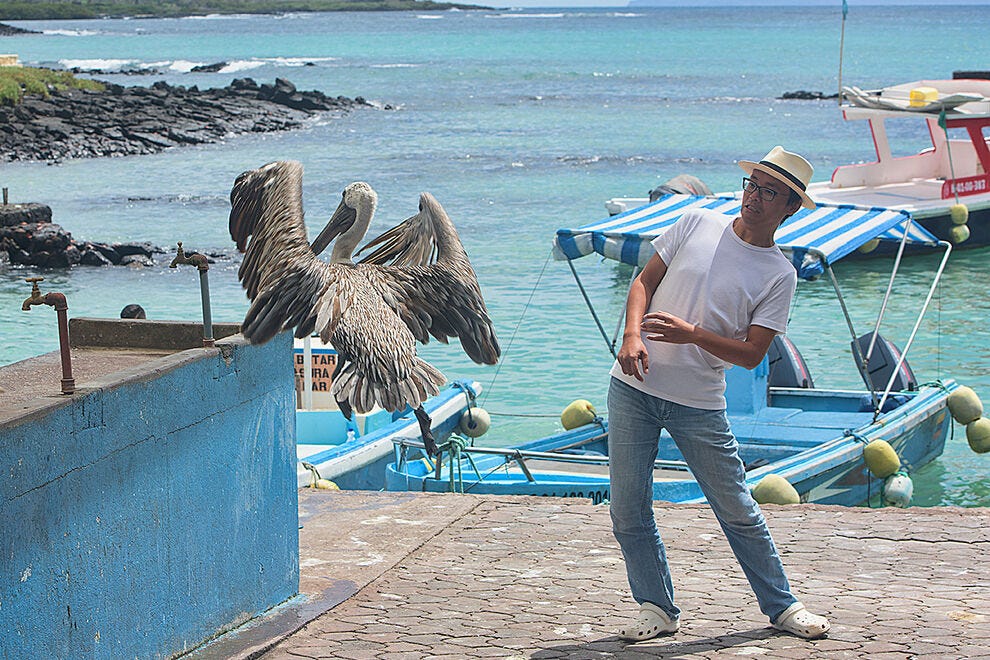 Wildlife is the star of the Galapagos. You’ll find sea lions sitting at the feet of fish vendors in the market, barking like contented dogs when the unsold cut pieces are dropped on them. Pelicans, marine iguanas and just about every other species seem to congregate and not bicker in the least. And on the more touristy islands (namely the three with accommodation), you’ll even see sea lions sleeping on bar stools during happy hour!

Whichever way you choose to come and go, you’ll take home a treasure trove of memories, an even greater collection of photos, and the chance to experience wildlife up close. 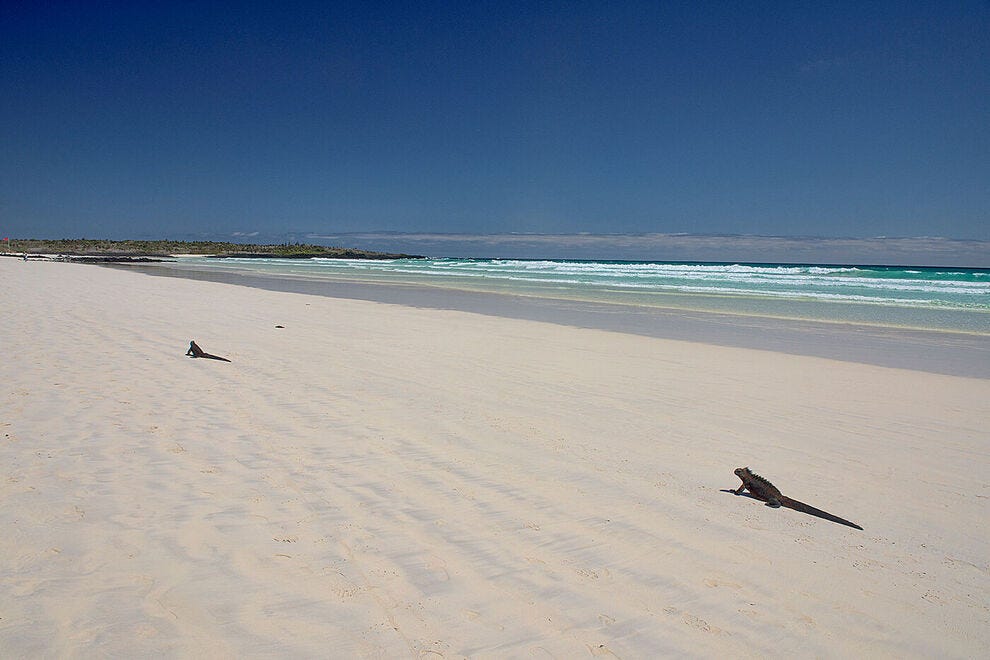 It’s Just You and the Iguanas: Tortuga Bay

The possibilities for visiting the Galapagos are endless. Go on an adventure with the Yacht La Pinta or the Santa Cruz II, expedition vessels that have both been awarded Safe Travel stamps by the WTCC (World Travel and Tourism Council). Or opt for land-based experiences, check into Finch Bay, a secluded eco-hotel located right by the beach on Santa Cruz Island.

Whichever way you do it, one thing is for sure, there is plenty of solitude, social distancing and rejuvenation to be had, just for you, your loved ones and maybe a few marine iguanas or sea lions too.