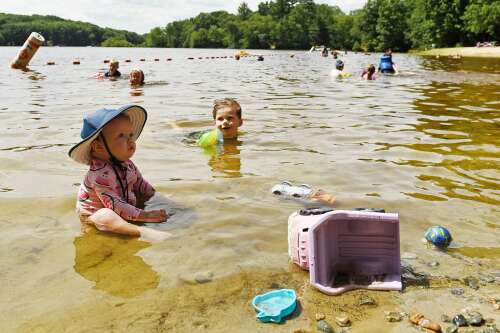 Amelia, nine months, and her brother Andrew, 3, cool off in the water near their mother, Abaigeal Schreck, not pictured, at Hopeville Pond State Park in Griswold on Wednesday, July 27, 2022. (Sean D. Elliot/The day) 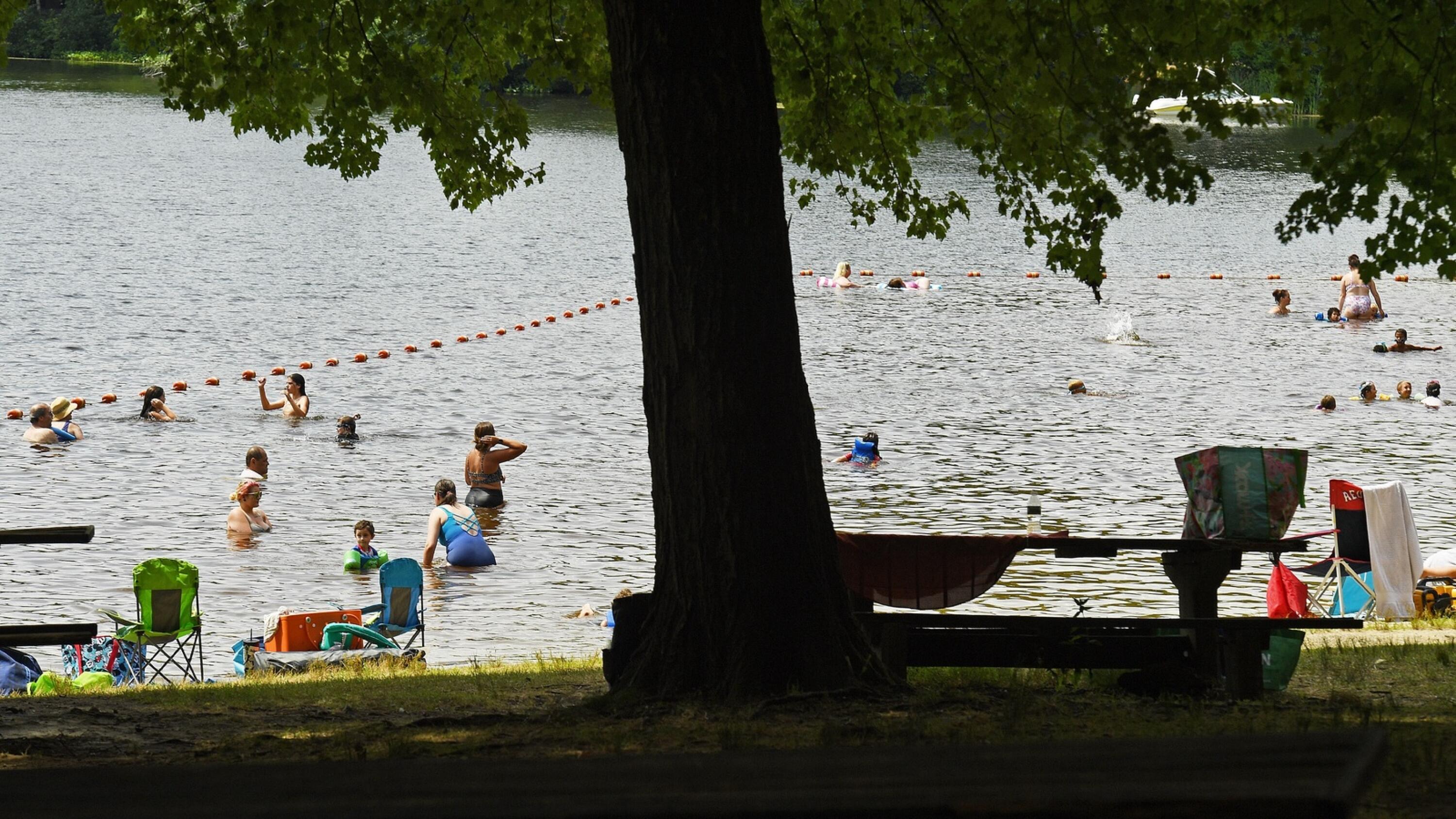 day at the beach

Editor’s note: Welcome to our annual summer series. This year, we asked readers to tell us about their favorite beach destinations within driving distance, because summer in Southeast Connecticut wouldn’t be complete without a day at the beach.

Griswold ― When Jade Sunny Santiago got the day off on July 19, she was asked to pick the spot for a day-long extended family picnic.

Amelia Schreck, 9 months, walks towards her mother, Abaigeal, not pictured, as her brother Andrew, 3, stays in the water at Hopeville Pond State Park in Griswold on Wednesday, July 27, 2022. (Sean D Elliot/The Day)

About 25 to 30 of her family members and friends joined her that day. They claimed a shaded picnic table and grill, set up a small tent for the children to take a break from swimming and running and let professional barbecue chef Michael Herman, 49, from Norwich provide the food: barbecue brisket, pasta salad and more.

“I do it because I love it,” Noble Smokehouse Sous Chef Herman told Mystic. “Today is my day off and I started cooking this brisket at 4am this morning.”

While many Connecticutans flocked to coastal beaches during the July heatwave, Hopeville Pond fans headed to their favorite quiet getaway, nestled in the deep pine groves of Route 201/Hopeville Road in Griswold. A steady cool breeze flooded the small sandy beach and shaded picnic area. Cars parked a short walk from the beach and picnic tables were also shaded.

Friends Abaigeal Schreck, 33, and Michelle McCormick, 35, both from Norwich, sat by the water on July 27 watching their children frolic in the water. Schreck’s 9-month-old daughter, Amelia, was crouched in the water beside her, while Andrew, 3½, waded in the distance. Schreck, who grew up in Essex, said he discovered Hopeville Pond a few weeks earlier and declared it their new favorite spot.

“There are no waves, and it’s so kid-friendly,” Schreck said. “The water is shallow, and there are lots of other kids and a nice bathroom. We were in Narragansett last weekend, and it felt like a death sentence with the waves and the crowd.

July 27 was the first trip to Hopeville Pond for McCormick and her children, Aiden, 6, and Tyler, 4. The two women like to go to the beach together to get “another look” at their children in the water.

“It’s nice not having to lug our stuff too far,” McCormick said. “I feel like people don’t know.”

According to the park’s history on the state website, the Hopeville Pond area, formed along a waterway that branches off from the Quinebaug River, was home to an old corn mill and sawmill, and in 1818, a woolen mill. Industrial Revolution magnate John Slater bought the mill and gave it a new name, Hope Mill. Since then, the area has been called Hopeville.

A fire destroyed the woolen mill in 1881 and other community buildings over the next 20 years.

The federal government purchased “a considerable acreage in eastern Connecticut” in the 1930s, according to the history article, and turned it over to the Civilian Conservation Corps, which planted the hundreds of pines that still dominate the region.

For Anna Walsh, 22, of Griswold, Hopeville Pond State Park is home. Walsh worked at the campground office for seven years, including his college years at Eastern Connecticut State University. Now the manager of a campsite, she has just completed her first year as a teacher at Uncas School in Norwich.

“I love it,” Walsh said. “It’s a perfect place to work. I spend my whole summer outside in my own town.

Hopeville Pond has 82 seasonal campsites, 81 tent sites and a full cabin for the entire 2022 season. The tent sites, intended to accommodate up to six people, each have a picnic table and a ring of fire. Campers use a separate beach from the public beach, also without lifeguards.

There are camping activities on Saturdays, usually movie nights and sometimes daytime recreational events coordinated with Griswold Parks and Recreation or the state’s No Child Left Inside program, Walsh said.

“We usually get families,” Walsh said. “We get a lot of meetings, groups, regular users. From time to time, these retired travelers visit different campgrounds.

Although the park’s rustic setting is attractive, park visitors have said they would like to see improvements. Picnic tables are wearing out, with rotting wood or broken planks, and the state has removed all garbage from the beach, along with a haul policy. Lifeguard staffing ended in the early 2000s, Walsh said.

Barbecue chef Herman gave beach barbecues a boost, but said the state should invest “a small amount of money” to replace picnic tables and add garbage cans. He suggested that new picnic tables would make a great Eagle Scout project.

“If you could spend $10,000 on it, it would be an amazing state park,” Herman said. “If you just installed new tables, you wouldn’t have to do anything for another 10 years. A pittance would make it a premier state park. You have to put some money into it. It only takes a small amount to trigger a big change.