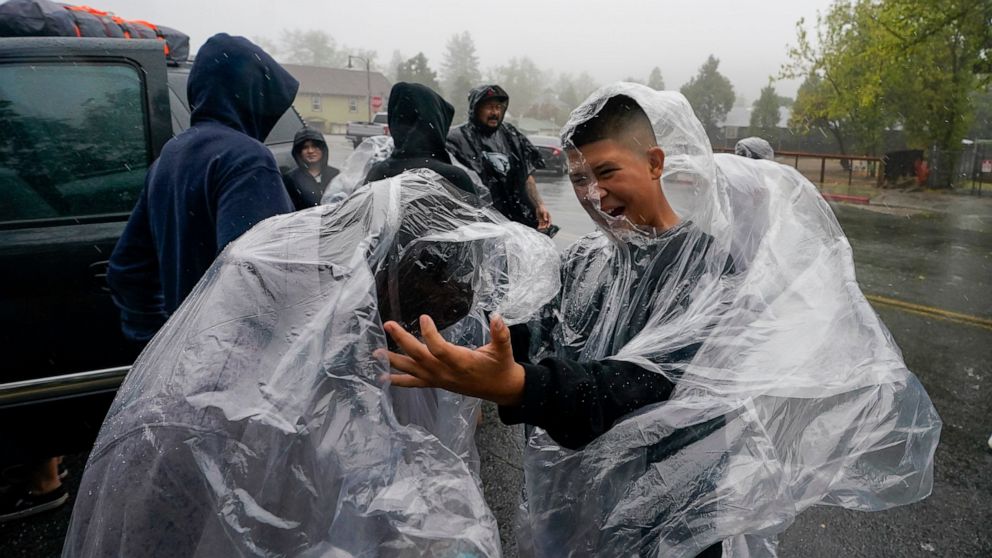 SAN DIEGO– Southern Californians welcomed cooler temperatures and scattered rain on Saturday from a tropical storm that moved away from the Pacific coast days after a relentless heat wave nearly overwhelmed the state’s power grid. .

Officials braced for flooding in coastal and mountainous areas from the storm and feared strong winds could spread the massive Fairview Fire about 121 kilometers southeast of Los Angeles. But minimal flooding was reported early Saturday and crews made significant progress on the fire and said they expected full containment on Monday. More than 10,000 homes and other structures were threatened by the fire.

The National Weather Service predicted an end to the grueling heat wave in the Los Angeles area on Saturday, although heat and wind advisories remained in effect through the evening, and warned of possible flooding in mountainous areas and some seaside communities.

In San Diego County, inland areas such as Mt. Laguna and Julian received several inches of rain from the storm while coastal communities received less than an inch, the National Weather Service reported.

Hurricane Kay made landfall near Mexico’s Bahia Asuncion in the state of Baja California Sur Thursday, but quickly weakened into a tropical storm by the time it reached southern California. Tropical conditions have worsened a heat wave that has seen temperatures top 100 degrees Fahrenheit (38 degrees Celsius) in many parts of California this week.

Some residents welcomed the respite from abnormally high temperatures.

“The heat was deadly, so for now it feels good,” Charles Jenkins said as rain poured in Friday in San Diego.

September has already produced one of the hottest and longest heat waves on record in California and some other western states. Nearly 54 million people were subject to heat warnings and advisories across the region this week as temperature records were shattered in many regions.

On Tuesday, as air conditioners hummed amid the sweltering heat, California set a record for energy consumption and authorities nearly instituted blackouts when power grid capacity was at breaking point.

Scientists say climate change has made the West hotter and drier over the past three decades and will continue to make weather more extreme and wildfires more frequent and destructive. Over the past five years, California has experienced the largest and most destructive wildfires in state history.

As firefighters made progress against the Fairview Fire, the fast-moving Mosquito Blaze in the foothills east of Sacramento doubled in size on Friday to at least 46 square miles (119 square kilometers) and threatened 3,600 homes in Placer and El Dorado counties, while covering the area in smoke.

Flames jumped the American River, burning structures in the mountain hamlet of Volcanoville and approaching the towns of Foresthill, home to around 1,500 people, and Georgetown, home to 3,000 people. More than 5,700 people in the area have been evacuated, said Placer County Sheriff’s Office Lt. Josh Barnhart.

David Hance slept on the porch of his mother’s Foresthill mobile home when he awoke to glowing skies early Wednesday morning and was told to evacuate.

“It was actually terrifying, because they’re like, ‘Oh yeah, it’s getting closer,'” he said. “It was like a sunset in the middle of the night.”

Hance left behind most of his electronics, all of his clothes and family photos and fled to Auburn, where he was reunited with his mother, Linda Hance, who said the biggest stress was wondering: “Is my house still there?

Tour de Tahoe organizers announced on Friday that they were canceling Sunday’s annual 115-mile bike ride around Lake Tahoe due to thick smoke from the fire – more than 80 miles away – and noted that the biking is a “heavy cardio activity that doesn’t pair well with poor air quality.” Last year’s ride was canceled due to smoke from another large fire south of Tahoe.

The cause of the Mosquito Fire remained under investigation. Pacific Gas & Electric said unspecified “electrical activity” occurred shortly after Tuesday’s report of the fire.