Graduates recognized for their academic achievements, leadership on campus 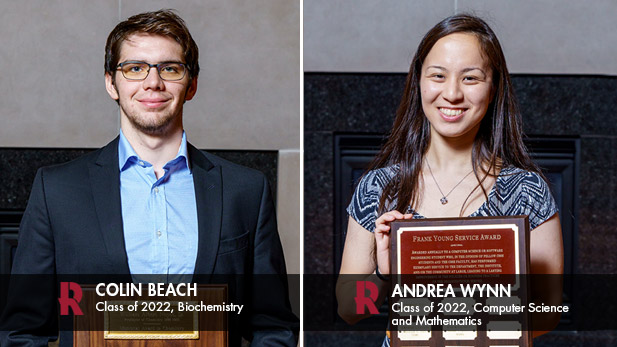 Outstanding academic achievement, contributions through undergraduate research, and service to campus and the community earned special honors among the class of 2022 for biochemistry graduate Colin Beach and computer science and mathematics graduate Andrea Wynn at this year’s launch on May 28.

Beach won the John T. Royse Award for being considered the most outstanding graduate, in the opinion of Rose-Hulman faculty and staff, based on academic achievement, student leadership, attendance extracurricular activities and general campus citizenship. Royse was a member of Rose-Hulman’s board of directors for several years; his son, John N. Royse, is a board member emeritus.

Beach, of Centerville, Ohio, was also among seven graduates awarded the Heminway Gold Medal for achieving academic perfection during their college careers.

During this time, Wynn received the Herman A. Moench Distinguished Senior Commendation for standing out as a laudable influence on members of the Rose-Hulman community, according to Herman A. Moench Professor Emeritus Thom Adams, Professor of Mechanical Engineering.

Beach excelled in the classroom, the research lab, and in leadership roles on campus. In addition to achieving a perfect 4.0 grade point average, he was recognized as a Goldwater Scholar for outstanding undergraduate research in science, technology, engineering, and mathematics. Beach also analyzed biostatistics and clinical data as part of a public health research team through Eskanazi Health’s Gregory S. Fehribach Center in Indianapolis. He helped mentor other Rose-Hulman students who participated in this program which provides summer internships for students with physical disabilities to equalize opportunities for economic independence and fair employment.

Beach plans to attend Indiana University School of Medicine to begin work toward a doctorate through the Indiana BioMedical Gateway program.

Wynn’s dedication to the campus and community has been showcased as a teaching assistant for various courses in the Computer Science and Software Engineering department. She also helped students, faculty, and staff in the online department transition courses during the early stages of the COVID-1 pandemic.

A campus champion for diversity and inclusion, Wynn was an active member of the Society of Women Engineers and twice served as president of the American Society of Asian Scientists and Engineers. She co-founded a remote tutoring program BackPat, a volunteer-run organization offering free tutoring that provides online resources to K-12 students across the country.

Rey Blaylock, program coordinator for the Center for Diversity and Inclusion, described Wynn as “exceptionally enthusiastic…accepting, honest and, above all, patient and hopeful.”

Wynn plans to attend Princeton University, where she will continue her research in applied machine learning.