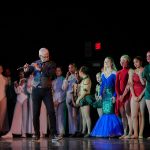 “Never give up,” said superstar flautist Nestor Torres in Ukrainian to inspire young talent at 18and “Future Stars Performing Arts Competition” Sunday, April 2 in front of nearly 2,000 friends and family in the Mizner Park Amphitheater.

Boca Raton, Fla. — The Torres guest performed two solos, including “Over the Rainbow,” to close the show after Billboard singer Kendra Erika, a hometown favorite and former “Future Stars” winner.

President and co-president of the Rotary Club of Boca Raton, Julie Vianale, welcomed 12-year-old dancer Dominika Zinchenko with a blue and yellow bouquet. Forced by the Russian attack to leave their home in Kyiv, Ukraine, the family arrived in Palm Beach County three weeks ago.

Dominika was among the middle and high school singers and dancers in 28 acts who performed in front of judges in cheer sections.

Each performer received a medal as a finalist for their participation in the February auditions. Second and third place prizes were also awarded in each category.

Fresh off his gig at the Arts Festival, Torres continues to support young talent when he agreed to perform on ‘Future Stars’.

“What a joy to be here and see these young stars in this Renaissance,” Torres said in a pre-show interview. Whether they win or not, “these performers are able to use their talent for the good of others,” a message he shared with the students on stage.

Erika applauded a “significant resurgence in live performance” after Covid, and encouraged students to continue sharing their talent on stage.

The Rotary Club of Boca Raton puts on this annual show in the tent and covered amphitheater hosted by the City of Boca Raton with sound and lighting by AEG Live Concerts. Dr. Dennis Frisch and Monica Speer were the masters of ceremonies. Rotarians Bill Riddick and Bob Buruchian were the show’s co-chairs and Chris Maners was the digital backtrack engineer.

The title sponsor was Groupe Raineau. The community partner’s underwriter was the Boca West Children’s Foundation.