Florida Road Trip: The Call of the Wild 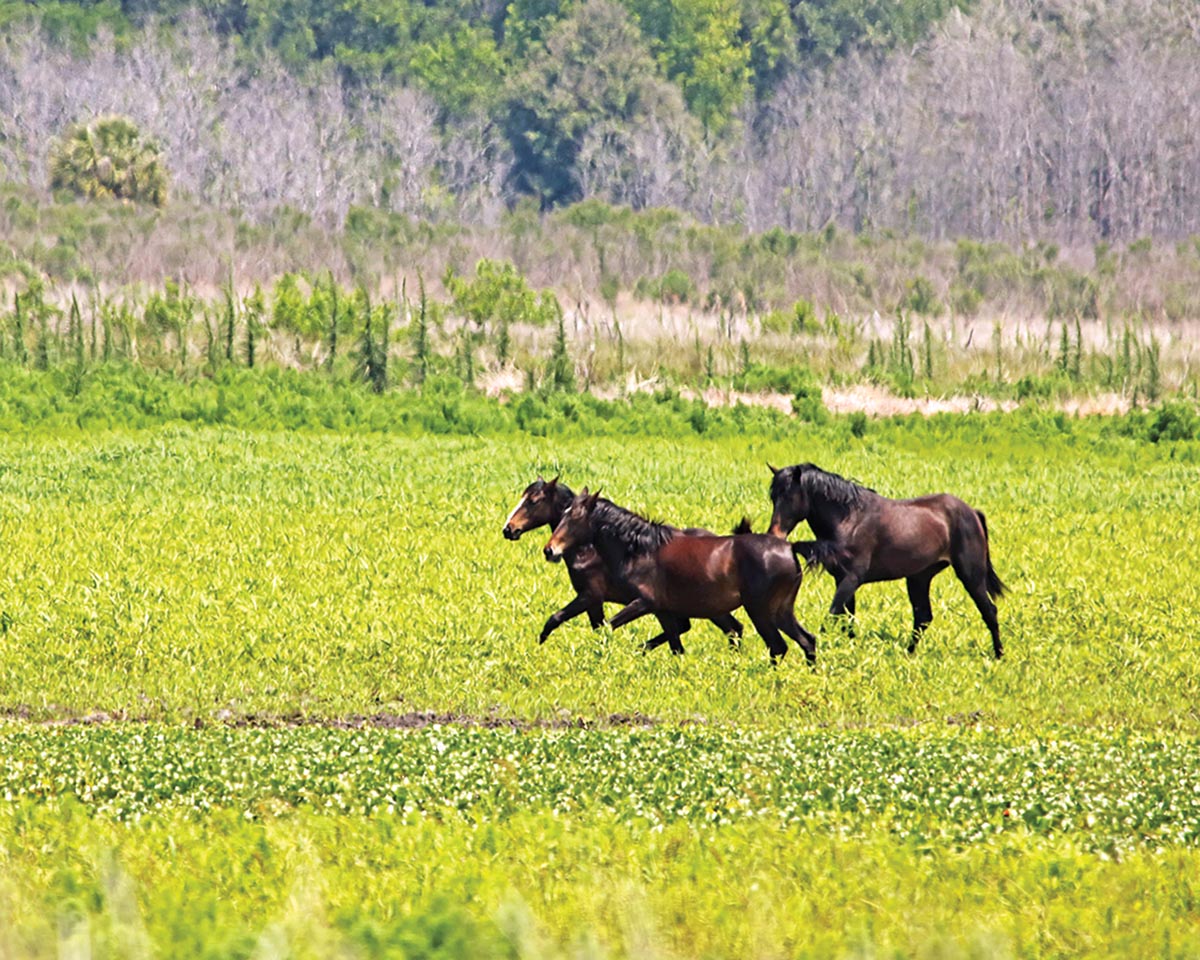 Walk among wild horses and bison

One of Florida’s best-kept secrets is the 21,000-acre savannah in the heart of the state, protected as a Paynes Prairie Preserve state park and home to herds of bison and wild horses. Choose from eight trails, including the paved 16-mile Gainesville-Hawthorne State Trail, in hopes of frolicking among these unlikely residents and capturing stunning images along the way.

Every year around the full moons of August and September, the reefs of the Florida Keys burst with colossal clouds of gametes as corals of all shapes and sizes – from brain to elkhorn to deer horn – engage in synchronized rituals of mass reproduction. Take in this rare sight with a night dive scheduled by a professional dive operator.

While most are content to confine interaction with the fiercest fish on the planet to their HD screens, a niche market has developed for extreme real-life, real-time marine expeditions. Immersed in Earth’s Technicolor aquarium, all anthropogenic boundaries disappear, and we quickly learn that, under the sea, it’s a world of sharks and we’re just swimming in it. Join the crew of Shark Addicts in Jupiter to snorkel freely among the ocean’s top predators, which vary by season but often include bull sharks, duskies, hammerhead sharks and lemon sharks. Expect a moment of panic as you enter shark-infested waters, feeling excited, scared and intimidated all at once. Soon, however, awe replaces fear and a once-in-a-lifetime wild interaction begins.

On the northwest shore of Lake Hancock in Lakeland, a former cattle ranch has been restored to its natural marsh state and full Florida distribution The jungle Book seems to have received the note. In the 1,267-acre urban oasis known as Circle B Bar Reserve, set off on a nine-trail Sunshine State safari, keeping your eyes peeled and ears alert for eagles, ospreys, owls, bobcats, otters, gray foxes, fox squirrels and the colossal 12-foot-long alligator named Humpback that set the internet on fire.

Mingle with the manatees

While Florida’s east coast manatees remain in crisis due to pollution, food shortages and boat strikes, the west coast population is thriving thanks to unwavering protection and a decade of restoration. seagrass by organizations such as Save Crystal River and Sea & Shoreline. In fact, in early 2022, authorities recorded 1,333 manatees in Citrus County waters, the highest number ever documented. The heart of this manatee utopia is the Crystal River National Wildlife Refuge, where gentle giants bask in the warmth of natural springs. It also happens to be the only place on the planet where humans can swim among manatees. A Plantation waterfront stay on Crystal River is anchored by the opportunity to get up close to manatees through tours offered by the hotel’s Plantation Adventure Center. Although their numbers are highest in the winter, some manatees reside in the area year-round, and Go-Pro-equipped naturalists are ready to capture your underwater adventure.

Paint the Beach for Sea Turtles

Between May and October, tens of thousands of endangered sea turtles – mostly loggerheads, green turtles and leatherback turtles – arrive on Florida shores to nest. About two months later, the hatchlings emerge from the sand and begin the journey called life. Luckily for us, several coastal parks and organizations organize seasonal walks in search of nesting turtles and their offspring. Some of our favorite experiences take place at the Archie Carr National Wildlife Refuge, home to the highest concentration of nesting Loggerhead Sea Turtles in the Western Hemisphere. Here, Sea Turtle Conservancy, Friends of the Carr Refuge, Stella Maris Environmental Research and others lead these encounters, which usually take place at night or very early in the morning.