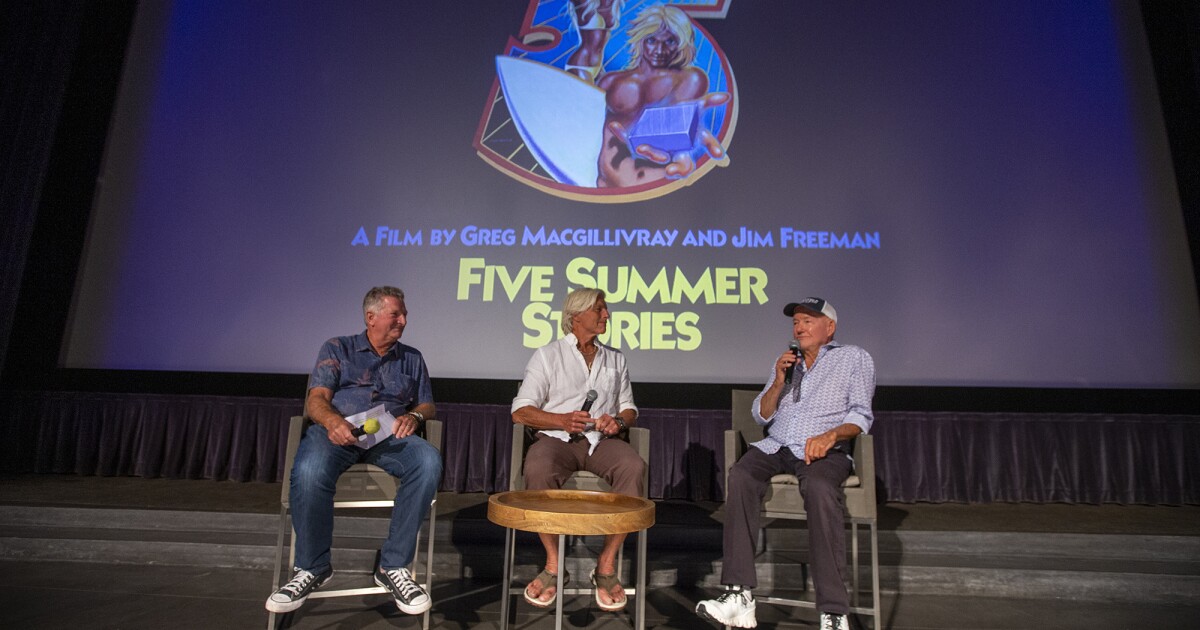 Greg MacGillivray was nervous when “Five Summer Stories,” the historical surfing documentary he produced with the late Jim Freeman, premiered in 1972.

There were epic slow-motion shots of great surfers like Gerry Lopez at the Banzai Pipeline in Hawaii. But there was also a segment on skateboarding. And another about how surfers of the day were exploited, at least in MacGillivray’s eyes, at professional events.

MacGillivray, a 1963 Newport Harbor High graduate and longtime Laguna Beach resident, also wanted it to reflect what was happening in the world. The film was created, for example, in the wake of the first Earth Day, as well as the creation of the Environmental Protection Agency.

“We got to the point where we were trying to make all of our movies curation-based,” said MacGillivray, now 77. “Surfers live in the water. They probably have the most intimate connection to nature you can have, and we wanted to reflect that in the film.

At the documentary’s premiere, MacGillivray said the reaction was 10 times greater than he might have expected.

Now “Five Summer Stories” celebrates its 50th anniversary and Quiksilver presents a remastered version in more than 100 independent theaters across the country.

It premiered at the New Port Theater in Corona del Mar on Wednesday night and is scheduled to premiere locally at the Regency South Coast Village on August 23.

MacGillivray said it was special every time he watched the film, as it reminded him of his former business partner Freeman, who died in a helicopter crash in 1976. “Five Summer Stories” featured a score by the Laguna Beach band Honk, who was inducted into the Surfing Walk of Fame last week.

Additionally, the Beach Boys let MacGillivray use their music for the film for free. At the time, the group was releasing the well-received 1971 album “Surf’s Up”.

“The film cast a wide net,” MacGillivray said, adding that the late Bud Browne provided much of the photography. “It wasn’t just for surfers. It was aimed at any young person interested in activity and nature. Everyone considered it the best surf movie they had seen, which completely surprised us. We were doing something we believed in, but luckily the audience believed in it too.

MacGillivray and Freeman made the film as a farewell to surfing, before moving on to Hollywood film productions. MacGillivray was to become influential in the IMAX format; “The Living Sea” in 1995 and “Dolphins” in 2000 were nominated for an Oscar in the Best Documentary Short category.

George said that for his money, “The Endless Summer” and “Five Summer Stories” are the two best surf movies. He remembers seeing the latter film for the first time in San Francisco in 1973, and being amazed.

“It was unlike anything we had ever seen before, and I mean literally,” he said. “The quality of the cinematography, the story themes it presented, the music, with an actual score written for the film… It really made us look at what we were doing and who we were differently. We had never seen our collective tribe presented in this way. It changed the perspective of surfers who watched it, not to mention those who participated in it.

McKnight also hopes a new generation of surfers will be inspired by the 50th anniversary re-release of the documentary.

Growing up in Pasadena, he said he fell in love with surfing in 1963. He rented the surf movie “Evolution” to show at San Marino High.

“I had signed a contract and I was instructed to only show it once, because it was in these big reels,” he said before smiling. “Of course, we watched it about 50 times.”

“Watching Gerry Lopez shoot those barrels in slow motion to a Honk soundtrack is just something I’ll never forget,” he said. “What I take away from this film, this film, is that we have all been subjected to the culture of surfing. We don’t realize the influence we have on fashion, print, music and language. I mean, who says “Hey man” and just throws a Shaka? There are so many things that have come from our world that are a huge industry, globally, generationally, and that makes me really proud.