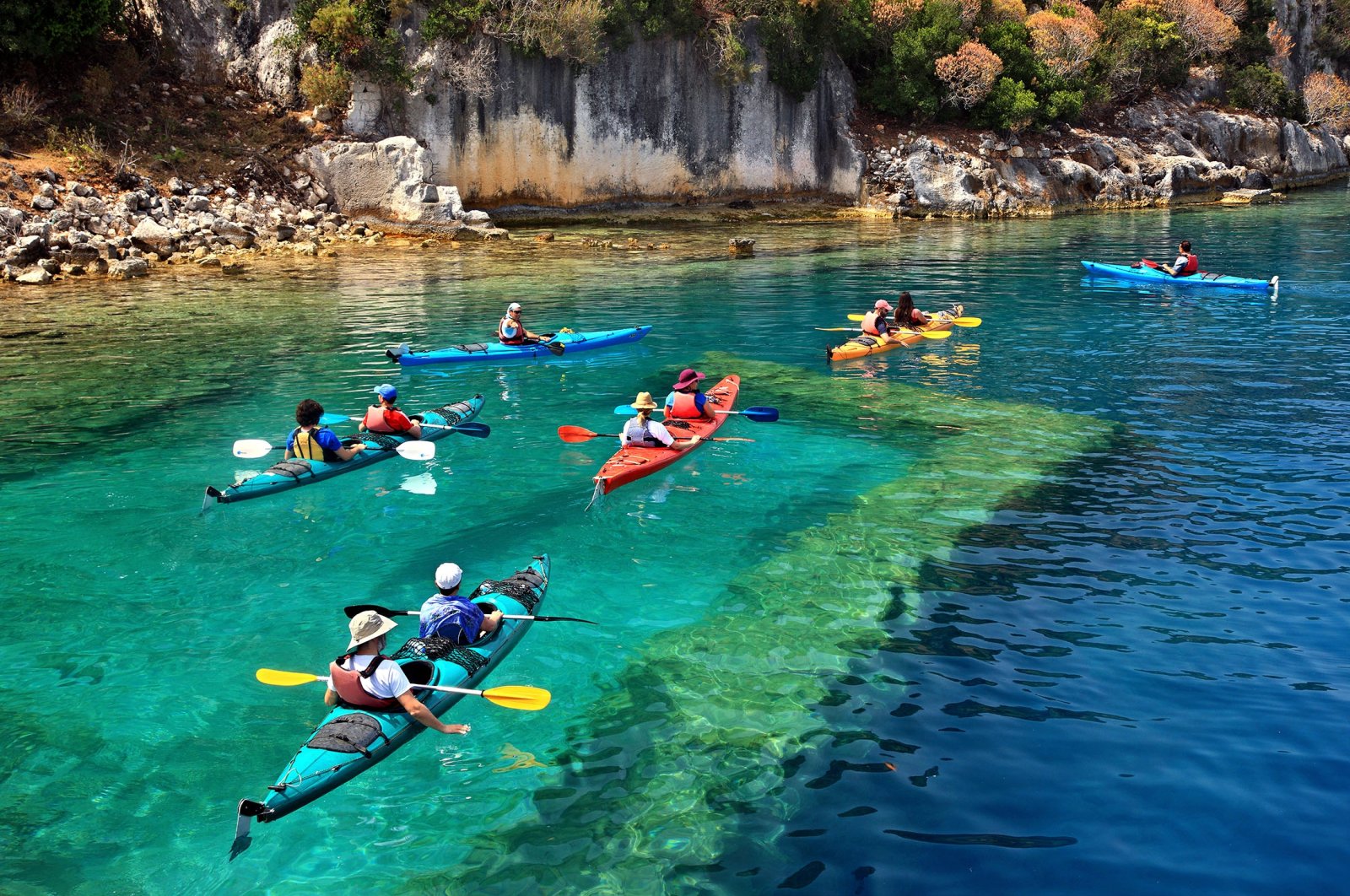 They may say canoe, we call it kayak, but the boat will probably be the same, so don’t dwell on the words as the name of the sport in Turkey can vary depending on who is talking about it. Indeed, the word “kayak” in Turkish also refers to skiing, so the word “kano” can sometimes be used to replace it. But, what I am referring to is strictly sea and river kayaking on small, sleek fiberglass boats and not the long, heavy canoes of Native Americans that we might have been referring to. So don’t get lost in translation, any kayak or “kano” will be a fun and relaxing trip that can be added to any trip or become the sole purpose of a trip, because believe me, Turkey has amazing places to visit. kayak and the following happen to be the favorites.

Some readers may recall that I recently participated in a travel documentary series called Hidden Aegean hosted by America’s most well-known travel journalist, aka travel detective Peter Greenberg. The series features lesser-known but spectacular locations along Turkey’s Aegean coast and I had the opportunity to share a bit about expat life in Dalyan. But what I didn’t share is that not only do I like kayaking in the Dalyan River with my own canoe, but I also kayak from a very special place called Kargıcak Bay. In fact, the location is so spectacular that the activity and the beach club that rents kayaks is also one of the most secret places that will be discovered in the series of trips.

Kargıcak Bay is located about 25 minutes drive from Dalyan and is the direct southern neighboring bay of the 4.5 kilometers (2.8 miles) wide Iztuzu Beach, well known as a protected area for nesting of Caretta carettas (loggerhead sea turtle). The ride is admittedly windy and although a Google search might reveal what one of the most dangerous roads in the world is, the route has since been rerouted to avoid the most intense stretch of a only way. Still, don’t be put off by the drive, because if you do it yourself, it’s worth it, but Kargıcak Bay also offers shuttle services to and from Dalyan.

Kargıcak Bay is a pristine and seemingly private beach club that is best known for its gourmet cuisine made from produce grown on their organic farm as well as their weekend sunset sessions with residents and visiting DJs and occasional musical performances. As for the kayaking or SUP board adventure, there is a natural turquoise pool to the left where one can make a pit stop or head right to turtle beach and see the coves cave-like along the way. This is sea kayaking at its best and the wind and waves pick up after noon so you’ll want to go early in the day or at sunset as in between it’s also unbearably hot

Just an hour’s drive northeast of Ula, which today is best known for its Kite Beach and Akyaka subdistrict in Gökova, is a village that could easily be mistaken for a town by the name of Akcapınar. Quickly becoming a hub for digital nomads and with an Italian restaurant, two co-working spaces, a vintage clothing store and more, there’s already plenty to do, but this village actually has a creek that leads directly to the kite beach. Kayaks and SUP boards can be rented from Akçapınar or the Mercedes Benz Kite School on Kite Beach, and the cove has a spectacular natural pool that locals call “the Amazon”.

Speaking of the Amazon, Club Amazon at Marmaris’ Bördübet is a campground with trailer bungalows to stay in and a creek for kayaking out to sea. Located in a pine forest, about 500 meters from the beach, Club Amazon is a great place to spend the day canoeing from the cove to the sea and spend the night feasting on a homemade buffet and watching the sky light up at night with stars . This “glamping” spot has long been a hidden paradise for a hip crowd of professionals and families looking for some time in nature.

The area has unfortunately suffered from forest fires, but the Club Amazon experience and the kayak route from the creek to the sea remains a highlight and worth the trip; however, be warned that the road there has some twists and turns.

Indeed, one of the most intriguing experiences to have in Turkey is kayaking above the sunken city of Simena, now Kaleköy and located on the island of Kekova. This uninhabited island off Demre in Antalya offers one of the most spectacular kayak tours ever. You can kayak above ancient buildings, mausoleums and structures dating back to the 4th century BC. The area is protected and therefore uninhabited, but there are guided kayak tours that can take you there from popular holiday destinations such as Kaş, Kalkan and Antalya.

Last but not least is a place close to my heart called Bafa Lake. Located near Milas in Muğla and visible from the main highway, Lake Bafa is a sublime slice of nature with tropical looks and the plants and birds that adorn it. The lake leads out to sea and has a small islet where you can canoe and spot cormorants and kingfishers, while the rock formations along the lake are what make the area even more famous. You see, Lake Bafa is actually home to the Latmos Mountains, which is a popular climbing destination, but it’s also the site of the ancient city of Herakleia and there are prehistoric cave paintings that date back to 4000 to 8000 BC. first form of these paintings ever seen.

These can be seen by staying in the town of Kapıkiri, the region’s premier tourist destination, with a dozen low-key hotels and restaurants serving outdoor sports enthusiasts and the region’s nature and birdlife. Kayaking on the lake is pure bliss and feels like crossing the seas of another planet, much like the Star Wars movie had a lake. I stayed at Silva Oliva Hotel and Farm on the highway in Pınarcık. Although this hotel is located on the road, you will never realize it once you get there. There are dozens of rooms with a view, all expertly appointed with pebble paths and terraces that offer complete privacy and relaxation. The restaurant uses a lot of its own organically grown produce and the owners are an expat family who regularly run educational tours and groups on site but they also have kayaks so I used to stop by to visit every time I’ve driven by, which is often because it’s conveniently located on the road between Bodrum and Izmir, making it the perfect pit stop.

Keep up to date with what is happening in Turkey, in its region and in the world.