Even hotter and wetter 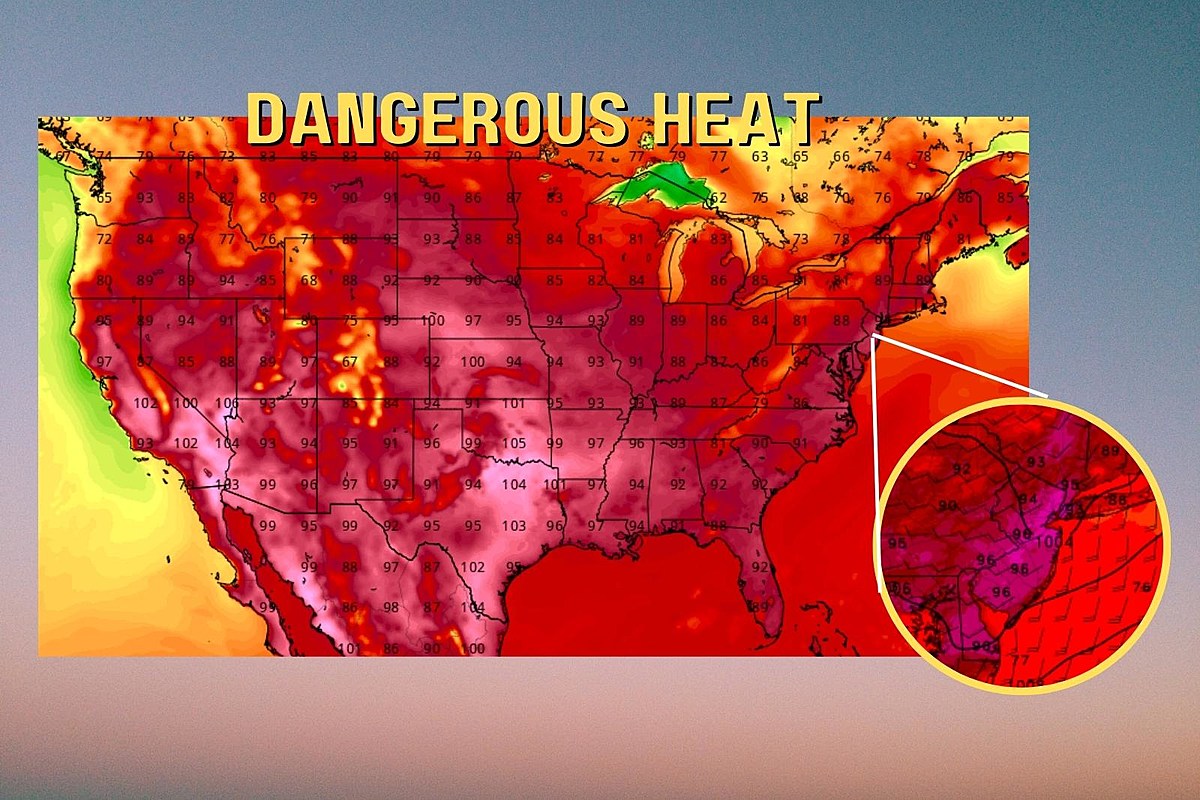 it’s hot. But you already knew that.

Newark Airport hit 100 degrees on Wednesday, for the first time since June 2021. That mark has been hit 99 times since records began 91 years ago — so, on average, about once a year. I suspect we’ll still hit the triple digit mark once or twice before this heat wave finally hits.

Thursday will be day 4 of 8 with widespread temperatures over 90 degrees in New Jersey. Additionally, dew points will hit the mid-70s, creating ridiculously humid conditions. An uncomfortable day. Even a dangerous day, if you don’t take care of yourself.

There is a risk of a parasitic thunderstorm on Thursday. But it will be isolated. And won’t cool much.

The 90s continues throughout the coming weekend. A slow-moving cold front will bring rain, somewhat cooler temperatures and much drier air Monday through Tuesday into next week.

Thursday could bring the highest heat index of the week, due to a sweltering combination of heat and humidity.

A Heat Notice was issued for almost all of New Jersey again. (Anywhere except the immediate coast this time.) In fact, for much of the state, that advisory has been extended through Sunday evening.

Morning temperatures in the high 70s. Afternoon highs in the mid upper 90s. Given the high humidity, the heat index will likely reach 100 to 105 degrees.

Remember that the heat index is not just the “felt” temperature. It is an important indicator of human health. And when the heat index crosses the century mark, we call it “dangerous heat”. Please take care of yourself – dress in loose, light-coloured clothing; stay extra hydrated all day; and plan to take frequent breaks away from the heat, in air conditioning if possible.

A southwesterly breeze up to 20 mph will likely prevent a significant sea breeze from setting in Thursday afternoon. Even mainland beaches will be warm, 90 degrees or more. Barrier islands have a chance of “only” 80 years. It will still feel incredibly steamy with the humidity.

You will occasionally find clouds obscuring the scorching sun. And there’s a chance for a stray thunderstorm or two.

I don’t want to be too specific about the timing or geography of a contextual storm, based on the unpredictability of the same situation on Monday. I would say that any threat of thunderstorm or downpour is isolated.

Given how warm and juicy the atmosphere will be, any storm that develops will likely produce a brief period of torrential rain and possibly gusty winds. The risk of hail and tornado is not zero, especially for North Jersey.

We will fall under the influence of a cold front on Thursday evening. But don’t get too carried away, the impacts will be minor. Thursday night will be partly cloudy and still muggy with low temperatures only dipping into the lower 70s.

Humidity will decrease significantly on Friday. But it will still be warm enough, with another day of widespread 90s on the way.

Lower than the mid-90s, in fact. With mostly sunny skies. Hopefully a lighter breeze from the southwest will allow a sea breeze to cool the beaches, although that is unclear.

A few models appeared in a pop-up shower just as the sun set on Friday evening. I’ve left that out of my “official” predictions for now.

Look for highs in the low to mid 90s, with scorching sun. Winds will become more southerly, allowing more beach towns in Cape May and Atlantic counties to sample the cooler sea air.

According to the indications of the model, Sunday will be the hottest day of the week. By the thermometer at least – hopefully the humidity levels will stay out of the “tropical” zone.

High temperatures are expected to climb into the upper 90s to around 100 degrees on Sunday. The breeze will pick up again, keeping the Jersey Shore warm as well. We will see more and more clouds.

And again, probably dry weather. There is a chance of rain on Sunday evening, although it is a slim chance at best.

Monday will be the big transition day, as a slow-moving cold front begins its way through New Jersey. We will eventually see scattered showers and thunderstorms. As we have experienced several times recently, this can include real soaks. But “scattered” also means parts of the state could miss beneficial rainfall.

Monday’s high temperature will still reach around 90 degrees for most of the state.

Rain may persist for part of Tuesday as well. But I’m still confident and hopeful that we’ll be tapping into slightly cooler and much drier air.

Everything is temporary, of course. The 90s will likely return to close July and begin August. It is, after all, the hottest time of the year.

NJ WEATHER CENTER: Your forecast for 5 days and more

Did you know that Friday the 13th Camp Part 1 is in New Jersey, and you can now visit it?

Get ready, Camp Blood, we’re coming for you. An incredible experience of one of the greatest horror movies ever made right here in New Jersey.