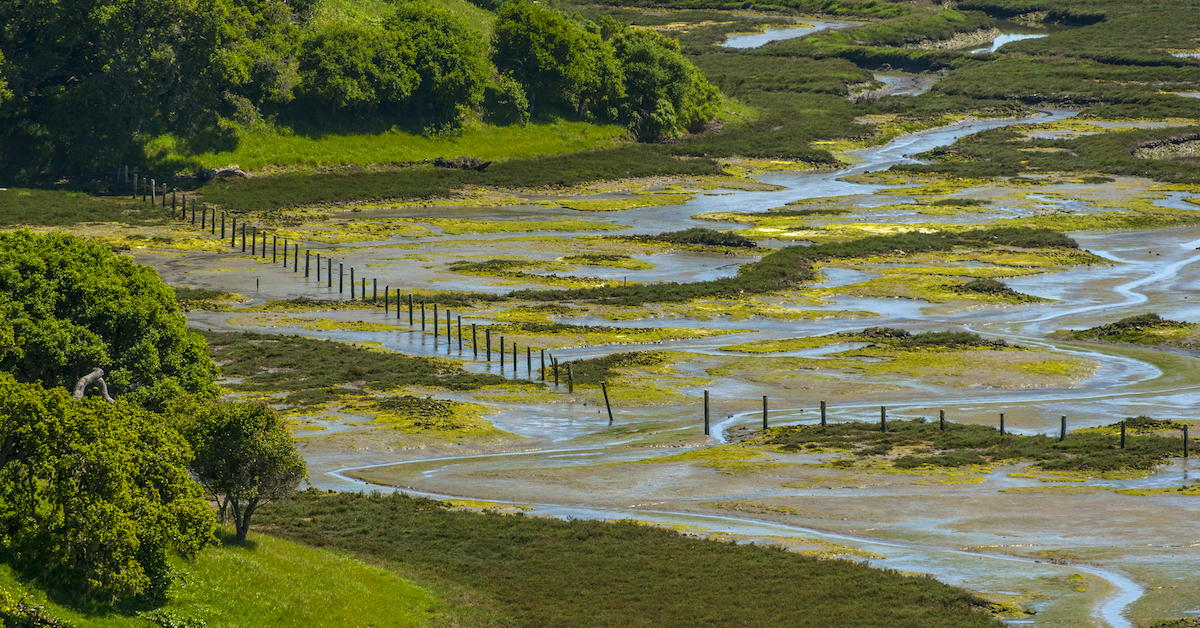 Who would have ever thought that visiting an area where mud is a dominant feature could be filled with fascinating creatures? Creatures linked to a complex food web that feed seals, sea otters, migratory birds and a host of other marine animals and plants.

Elkhorn Slough Estuarine National Research Reserve is a protected wetland gem, home to eelgrass, gherkin, alkali heather and yes, mudflats. At low tide, these flats extend from the edges of the quagmire for hundreds of meters, often lined with bright green algae. Hundreds of migrating and resident birds feed here, probing the mud for worms, clams and other invertebrates.

Elkhorn Slough is close enough to the Bay Area to explore in a day. This unique 1700 acre reserve is a seasonal estuary and is one of thirty nationally protected research reserves dedicated to the protection of coastal wetlands. This special habitat is a welcome respite from the urban environment of San Jose and its surrounding towns.

The entrance to the quagmire begins at Moss Landing, a quaint little harbor off Highway 1 just north of Monterey. Elkhorn Slough meanders inland like the curve of an elk antler, seven miles to Hudson’s Landing near the town of Watsonville. It is the largest area of ​​tidal salt marsh in California outside of San Francisco Bay. The rich diversity of this seasonally productive estuary allows a large population of plants, marine mammals, fish, invertebrates and migratory birds to thrive.

The reserve features 5 miles of easy-to-walk trails that meander through a variety of habitats, including oak forests, pickleweed swamps, and mudflats. The view from the observation area allows you to see the large expanse of this wetland and the surrounding hills. Here you can peer through telescopes and possibly see nesting herons in distant eucalyptus or watch California brown pelicans rise and fall above the tidal waters of the quagmire. Here are five more reasons to visit this unique coastal region.

If you are energetic and so inclined, you can rent a kayak or sign up with a guide to paddle through the quagmire. Kayak Connection is located near the mouth of the swamp in Moss Landing and they will be happy to outfit you for the trip. Paddling in a kayak allows you to get quite close to the harbor seals and otters that frequent the quagmire, as well as seeing the colony of herons and maybe a leopard shark or bat ray. Sea otters appreciate the protected nature of the quagmire and here they are safe from their main predators. They often hang out in large groups called rafts and if you’re lucky you can see them diving for crabs and clams, then rolling onto their backs, placing the food on their chests and continuing to enjoy.

There are also plenty of harbor seals, usually hauled up on the shore, enjoying a siesta after a night’s diving to fish.

If you prefer to sit back and enjoy the scenery and wildlife without paddling, there are tour boats that will take you to a flat pontoon with a naturalist on board to give you detailed information on what you are seeing. Check out the Elkhorn Slough Safari, which has an office and gift shop in Moss Landing. You will need to make reservations for the tour.

Pro tip: If you choose to paddle alone be sure to check the tides as it is difficult to come back against the combination of wind and high tides.

Docent-led tours take place every weekend and on some weekdays during the summer. Tours start at the Visitor Center near Elkhorn Road where parking is free. If you choose to hike the trails with a guide, you’ll learn about the history of the reserve and the steamboats that once roamed the quagmire, picking up bales of wheat from local farmers and then returning to the ocean. to load them. on clippers that eventually headed to San Francisco.

If you decide to hike alone, I recommend the trail to Hummingbird Island, which takes you on the tracks of the Southern Pacific Railroad built in 1872 with 200 Chinese workers.

Climb the wooden steps past two redwood trees that once shaded the Empire Hunting Club. In the early 1900s, businessmen from San Francisco boarded the train and headed to Elkhorn Slough to stay at the club and hunt the ducks. On the other side of the island, you can see kayakers venturing into the channel and you are likely to see hundreds of shorebirds, such as willows, marbled godwits, sandpipers and, above you, gulls and terns, diving and diving to fish.

On the way back, peek into the old cow barn which once housed a dairy and depending on the time of year you may see horned owls or barn owls nesting in large wooden boxes on platforms in the rafters. Return to the Visitor Center and enjoy a packed lunch at the picnic tables outside where you may see Tree Swallows diving for insects or Western Bluebirds perched on a fence.

Pro tip: If you are interested in birds, there is an expert-led birding tour on the first Saturday of each month. Call ahead to reserve a spot.

3. Lunch and Shop at Moss Landing

There are several good restaurants in the town of Moss Landing and it is a great place to buy fresh fish, sometimes right next to the local fishermen’s boats. If you decide to go, take a walk on the bridge where you can see some of the fishing boats and even spot an otter or two. You are also very close to Moss Landing State Beach where there is plenty of free parking and a beautiful beach to walk on. If you get hungry, I highly recommend Phil’s Fish Market and its restaurant for great seafood cuisine, including fried calamari and clam chowder. They also sell a variety of fresh fish.

This restaurant is extremely popular and seats are allocated on a first-come, first-served basis. Be prepared for long queues, but it’s worth the wait. If you’re craving Mexican fare, there are two good restaurants nearby and both accept reservations. The Upper Enchilada is a small dining establishment with a lovely garden and offers indoor and outdoor dining. The menu is excellent. The other place is called The Whole Enchilada, which accommodates more people in a very nice indoor setting. They have an extensive menu including enchiladas, tacos, chili rellenos, taco salads, shrimp quesadillas, and highly recommended margaritas.

Pro tip: I recommend visiting this area on a weekday as the crowds will be reduced.

4. Head to Castroville for local artichokes

If you’re craving fresh local produce, including artichokes, you’ve come to the right side of the coast because Castroville, a few miles south of Moss Landing, is considered the artichoke capital of the world. There are fruit and vegetable stands between Moss Landing and the town of Castroville, an easy stop when heading south.

Depending on the time of year, you can browse stalls selling local strawberries, avocados and vegetables. If you choose to visit Castroville, there are antique and thrift stores to browse, and a bar/club named after Norma Jean Baker (Marilyn Monroe), who was the first queen of the Artichoke Festival in 1948. If you love fried artichokes, head to The Giant Artichoke Restaurant for all sorts of artichoke menu choices.

Moss Landing State Beach is a beautiful beach with plenty of waterfront to meander and survey whatever the tide brings to your feet. There are often clam shell halves, sand dollars and bits of kelp left over from the tide. Here you can see the sweep of Monterey Bay with Santa Cruz to the north and Monterey to the south. Don’t be surprised if you spot seals swimming on the crests of the waves or see a line of California brown pelicans flying in perfect formation with their large wings outstretched to either side. In winter, one of the favorite places for surfers is the north side of the pier, as it is a difficult shoreline. Although the water in Monterey Bay is too cold for all but the bravest swimmers, kick off your shoes and let the foamy water tickle your toes.

Pro tip: The waves can be strong and the undertow powerful, so be on your guard.

For more information on traveling in California, check out these articles: