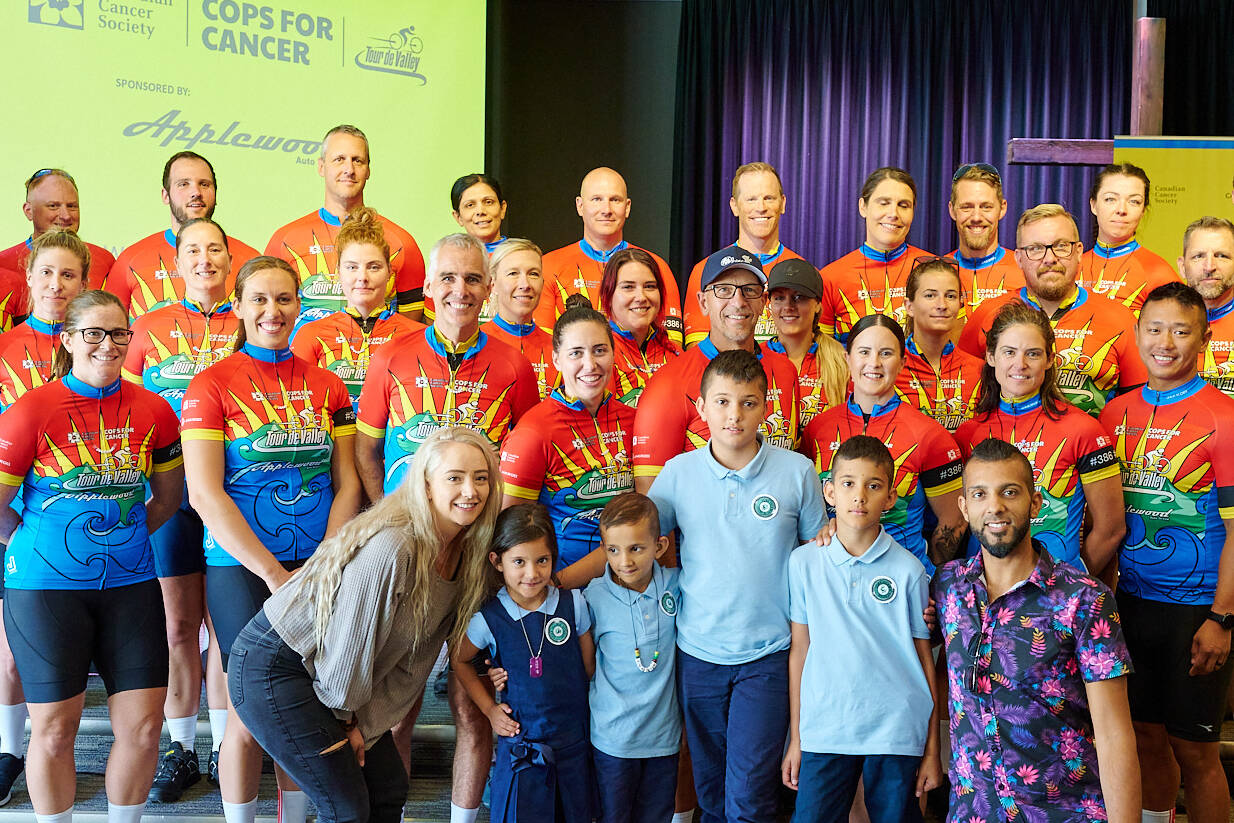 By Tricia Weel, for the North Delta Reporter

It’s easy to enjoy summer and all that life has to offer – when you’re young and healthy.

For the hundreds of children who are diagnosed with childhood cancer in Canada every year, life involves far more visits to the doctor, hospital and cancer treatment than outings to a lake, beach or on a waterslide.

That’s why law enforcement and emergency services are gearing up to participate in this year’s Cops for Cancer Tour de Vallée.

A partnership between the Canadian Cancer Society and local first responders aimed at changing the future of childhood cancer, the Cops for Cancer Tour de Valley is an 800-kilometre bike ride through the Fraser Valley that runs from 21-29 september.

“I think everyone has had an impact of cancer on their life, whether it’s a friend, co-worker or family member,” the Delta Police Department constable says. Kimberly Loeppky, who is taking part in Valley’s Cops for Cancer Tour this year alongside fellow DPD Const. Terra Schmuland and 33 other law enforcement and emergency service personnel.

“One of my main inspirations for enrolling in Cops for Cancer was my peers. I have spoken with countless colleagues who have participated in previous years and have been told that the experience was truly amazing. “one of the most meaningful and impactful things they’ve ever done. After listening to their experiences (with Cops for Cancer), I knew this was something I wanted to be a part of.”

Now in its 25th year, Cops for Cancer began in 1994, when Sgt. Gary Goulet of the Edmonton Police Service met Lyle Jorgenson, a then five-year-old boy with cancer. After learning that he was being ridiculed at school because of his hair loss from chemotherapy, Goulet rallied his colleagues and they all shaved their heads in solidarity with Jorgenson.

In 1997, the first Cops for Cancer cycling event, Tour de Rock, was held with 12 officers cycling across Vancouver Island.

Today, Cops for Cancer has evolved across the country and now includes four bike rides in British Columbia, with hundreds of participants raising nearly $50 million to change the diagnosis of childhood cancer since its inception.

Participants engage local communities and schools along the way to raise funds for vital childhood cancer research and a national support system for children with cancer and their families and caregivers.

Last year, the program raised $1.2 million, despite logistical challenges due to the COVID-19 pandemic.

“The Canadian Cancer Society is the largest national charitable funder of childhood cancer research in Canada and an advocate for better support for families,” said Ninon Daubigeon, Senior Manager, Signature Events at the Canadian Society. cancer.

“None of the work we do would be possible without the Cops for Cancer program and our partnership with first responder organizations across the province.

The runners who take part will cover between 80 and 120 km each day during the fundraising event, with all – a team of 35 members in total – training over the past eight months, both privately and in groups. .

For Loeppky, who was born and raised in the Lower Mainland and has worked at the DPD since 2020, one of the main reasons she became a police officer was to make a meaningful impact within the community.

“One of the main reasons I wanted to work for Delta Police in particular was because of the close ties the department has with its community,” she says, noting that she had limited cycling experience before joining. sign up for Valley’s Cops for Cancer Tour.

“I had never ridden a road bike before, and I had never used clip-on shoes. It was definitely a new challenge for me.

Being consistent with training, especially while balancing a busy work-life schedule, has been important, Loeppky notes, and she’s proud of the progress she’s made in road cycling over the past few months.

Her friends, family and colleagues have all been so supportive, she notes, especially those who have participated in the cycling event in the past.

“I think the biggest reward is seeing how much of an impact fundraising has had on the children we support,” she says.

“Being able to connect with kids and their families has such an impact on all runners.”

Anyone wishing to learn more about the program or make a donation through the Loeppky’s or Schmuland’s page can visit www.tourdevalley.ca.