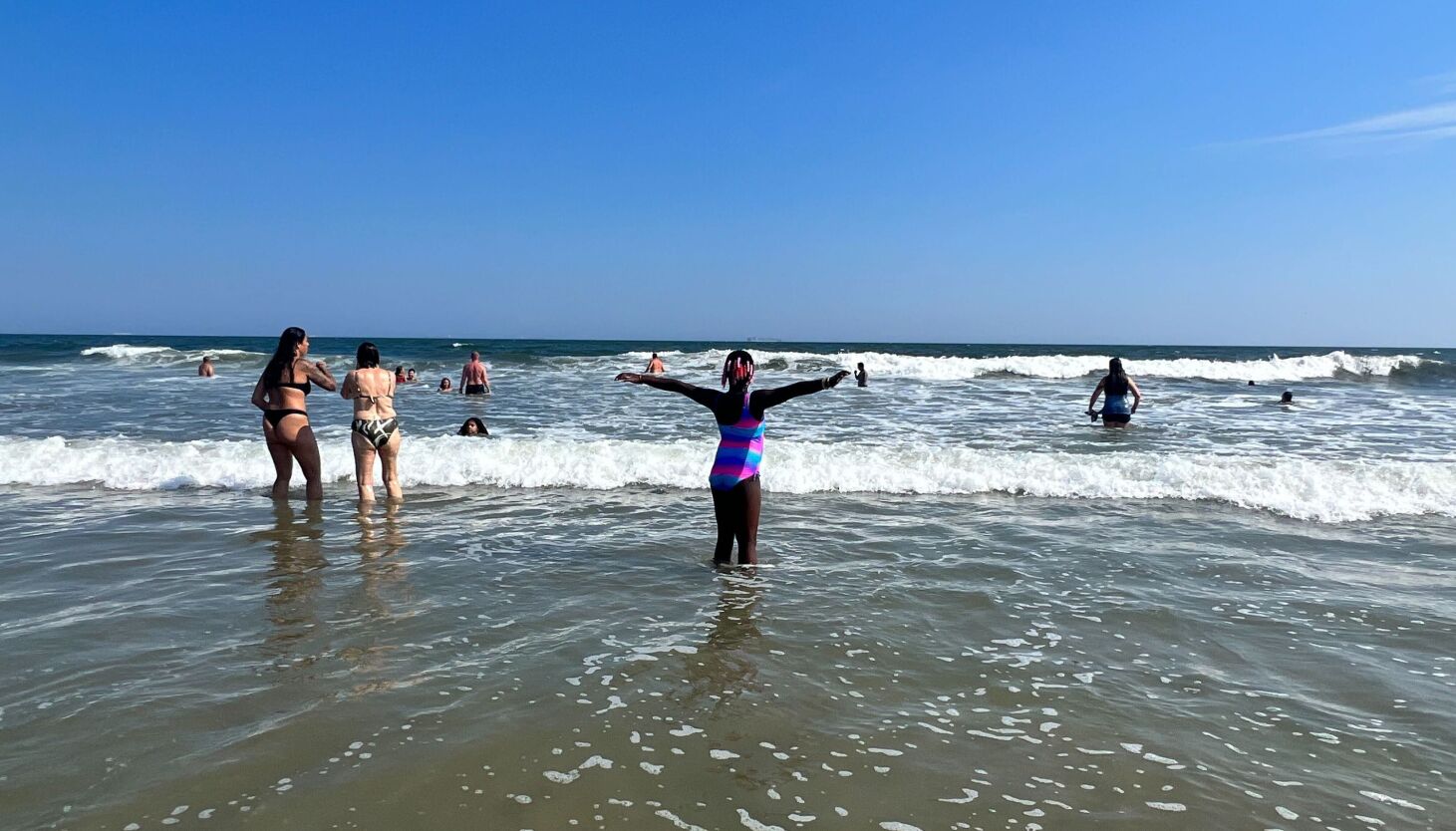 Sharks are making waves in the Rockaways this week.

New York beaches were closed to swimming this week after shark sightings, including the entire stretch of Rockaway Beach in Queens on Tuesday, according to the Parks Department.

On Wednesday, the beaches were open for swimming as temperatures hit the 90s. There had been no shark sightings by late afternoon.

But sharks and other sea life are moving closer to the city’s shores in part because of cleaner, warmer oceans, experts say.

Sharks were first spotted on the east end of Rockaway Beach on Sunday, and a 20-block stretch was closed for about two hours, officials said.

On Tuesday, more sharks were spotted on the beach – including a shark that jumped in the air and took a spin on Beach 121st Street – which led to the complete closure. In the town of Quogue, Suffolk County, a dead juvenile great white shark washed up on the beach on Wednesday, according to the state Department of Environmental Conservation. He was then taken back to sea.

Long Beach and other Long Island beaches were also closed sporadically this summer, and two people were bitten earlier this month in separate shark incidents on Long Island.

Sharks swimming closer to urban shores are a sign of both environmental progress and climate change, experts say.

Typically, urban areas have been too polluted and overexploited for sharks to thrive. But Chris Paparo, director of the Center for Marine Science at Stony Brook University, pointed out that the presence of sharks indicates better management of the ocean.

“Seeing sharks in our local ecosystem is extremely important, and a sign that the environment around us is healthy,” he said. said in a series of Twitter videos.

Neil Hammerschlag, director of the University of Miami’s Shark Research and Conservation Program, noted that sharks are cold-blooded and depend on warm water to sustain their metabolism.

“With long-term climate change and increasing heat waves, we are seeing some species show greater residence in these areas that may have historically been too cold,” he told The CITY.

Ocean temperatures in the northeast are on the rise faster than the ocean on a global scale, according to the National Oceanic and Atmospheric Administration.

“We need to do things to be smarter about how we use water,” Hammerschlag said, suggesting people avoid swimming alone, at dawn, dusk or night, or in places where fish activity is “unusual”. “Fortunately, people just aren’t on the shark menu.”

Swimmer Thomas Troisi said he’s been swimming in Rockaway for more than 60 years and only in recent years have he seen so much marine life. He’s spent the past 12 summers in Rockaway and is in Manhattan and mainland Queens during the colder months, he said.

“It’s just a joy when you sit on the beach and watch the dolphins come back or watch a whale jump – it doesn’t happen that often, but when it does it’s breathtaking,” he said. -he declares. “We really didn’t have that growing up because the water pollution was so terrible.”

The NYPD is also in a “shark communication network” with other authorities who monitor beaches from the Hamptons to Sandy Hook, NJ, reporting sightings of sharks in the water to other things washing up.

Sharks in Rockaway? How about some proof? Tricia Gahn caught this guy getting out of the water yesterday on 121st Street Beach while her husband was teaching their son, Timmy, how to surf. Look closely. It’s not a dolphin. Let’s say Timmy’s lesson was cut short. pic.twitter.com/H4KPu9Rvl7

Maxine Montello, program director for the New York Marine Rescue Center in Riverhead, noted that beachgoers share the waters with all kinds of marine life, including sharks, turtles, seals, whales and dolphins.

“People are more outdoors, people are looking for these animals – and there’s this overlap of great resources and healthier water,” she said.

“Our waters are much better than before,” Montello added. “We have an increase in general resources – food, shelter for these animals, a unique mix of marine life coming back to our waters.”

Get the inside scoop from THE CITY

Subscribe and receive the latest stories from THE CITY every morning

Thank you for your submission!