9 Amazing Ways to Explore the Bay of Fundy 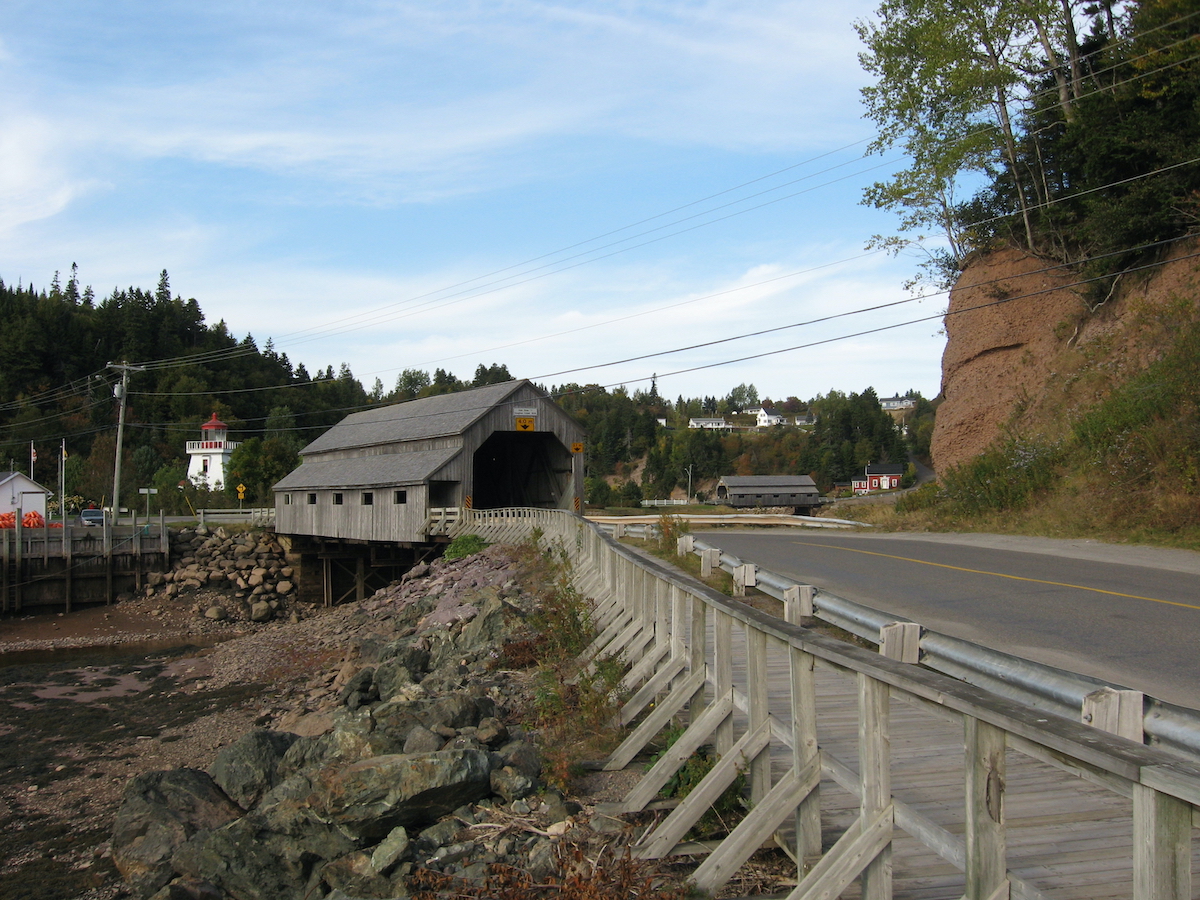 The rugged coastline surrounding the Bay of Fundy in New Brunswick, Canada has so many features that it is difficult to reduce them to a short list. The area is a UNESCO Global Geopark and Biosphere Reserve, making it one of the greatest natural wonders of the world.

The Bay of Fundy was formed billions of years ago as continents connected and separated. Volcanic eruptions shaped the landmass and the Ice Age created massive glaciers. When they melted, melting ice sculpted the Bay of Fundy into a bathtub shape, creating the highest tides in the world.

Rising and falling tides, along with towering cliffs, rock formations and sea caves make this a fantastic destination to explore. The tides go out twice a day, powered by the gravitational pull of the moon, the sun, and the rotation of the earth. At low tide, the beaches and mudflats are revealed. They are covered with water at high tide which rises at least 33 feet more than 6 hours later.

The Bay of Fundy can be reached by air to Toronto’s Pearson airport and connecting with a coastal city in the province, such as Saint John. Hire a car and drive along the coast to visit fishing villages like St. Martins, where you can hop on the scenic Fundy Drive. Here are nine suggestions (in any order) for enjoying this Canadian province.

I was a guest of Tourism New Brunswick for this experience, but all opinions are my own.

St. Martins is a quaint village with a rich shipbuilding history. The city is known for its cliffs, caves and historic mansions. At low tide, you can walk on the seabed and in the red sandstone caves designated as a Fundy Biosphere Reserve by UNESCO. It is also “the last remnant of pure coastal wilderness on the East Coast of North America”.

Kayak in and around the coast for another fantastic way to see the caves. The quintessential lobster meal (and other types of fresh seafood) is a staple in this seaside town. Plus, it’s the only place in the world where you can take a photo that includes two covered bridges and a lighthouse.

Pro Tip: The Beach Street Inn is a beautiful stay in St. Martins. The hospitality, warm decor and delicious restaurant are just a few of the reasons why this is the perfect place to unwind after exploring the Bay of Fundy.

2. Drive along the Fundy Trail Parkway

The west entrance to the Fundy Trail Parkway is a 12 minute drive from the village of St. Martins. This world-class scenic drive stretches 19 miles. It offers 20 scenic lookouts of the Bay of Fundy, and many are wheelchair accessible. The Fundy Trail Parkway has five beaches and four waterfalls and offers 22 miles of hiking and biking trails.

The boardwalk also has a suspension bridge over the Big Salmon River. Stop at the interpretive center, which explains the logging history of the area, then cross the bridge over the river. It is the home of New Brunswick’s Grand Canyon, Walton Glen Gorge.

I drove the boardwalk stopping at various lookouts for spectacular views. I walked on trails to the waterfalls and walked to the beach at low tide. It took 25 years and $100 million to build the boardwalk, which was completed in 2020. This boardwalk should not be missed.

Pro Tip: The hike to Walton Glen Gorge is an easy 1.5 mile hike to a viewing platform. The gorge, created by a series of volcanic eruptions, is 550 million years old. It is 1,000 feet in diameter and 525 feet deep.

3. Search for fossils at Cape Enrage

Cape Enrage is one of the marine wonders of the world, with tides rising up to 53 vertical feet twice a day. The cape gets its name from the choppy waters that pass over the reef. The original lighthouse, built in 1838 and replaced in 1870, protected sailors in the most dangerous area of ​​the upper Bay of Fundy. It remains one of the oldest lighthouses on the Fundy coast of New Brunswick.

Abseil 142 feet from the cliff at the cape or jump on the 600-foot-long zipline that offers stunning views of the bay. Fossil tours are led by amateur paleontologists on the beach (by appointment) and offer two levels of challenge. Once on the beach, you will discover plant fossils and learn about the different layers of sedimentary rocks of Cape Enrage.

Alma, New Brunswick is a quaint fishing village and the gateway to Fundy National Park. It is an ideal stop to enjoy local restaurants offering fresh seafood caught in the waters around the bay. The Holy Whale Brewery is housed in a converted church where the master brewer serves delicious craft beers and tasty pub food. Tipsy Tails Restaurant has front row patio seating to watch the changing tides while munching on delicious food.

In Alma, you can visit the Molly Kool Heritage Center (check the website for programming). Molly Kool was the first female naval captain in North America. Take a tour in the national park. Hike on easy boardwalks (moderate and difficult trails as well) with breathtaking views of plunging waterfalls and a historic covered bridge. You can also camp and swim at designated spots in the national park.

5. Kayak around the famous Flowerpot Rocks

The Hopewell Rocks, also known as the “Flowerpot Rocks”, are a collection of over 20 sea stacks carved by New Brunswick’s famous tides. The rocks, formed from layers of conglomerate, are more than 600 million years old. Trees and plant life growing atop the rocky cliffs remained after the cliffs eroded and separated from the land, resembling flowerpots. The tall towers also take on shapes that resemble people and animals – dotting just over a mile of coastline.

The Hopewell Rocks are iconic and photographed so often that they are often the main reason visitors come to the province. To visit the bottom of the ocean at low tide, go to one of the three access points. There is the main deck to descend 99 steps to the bottom of the ocean. The North Beach ramp is easier and wheelchair accessible (it can be tricky to get around on the rocky beach), and the Demoiselle trail drops down to sea level. Once there, the uniformed guides love you tell more about the training. The staff has animal names for a few, including the bear, stepmother, and ET.

At high tide, you can explore the rocks by choosing a sea kayaking adventure with Kayak The Rocks for “the highest paddling experiences on earth”. You can paddle around, under and through the Flowerpot Rocks.

The park also has a network of well-maintained, wheelchair-friendly trails that include stunning lookouts just steps from the interpretive center. The center has restrooms, a restaurant, and exhibits that explain all about the tides and the formation of Hopewell Rocks.

Saint Andrews oozes charm and plenty of shops and restaurants. A must-do here in St. Andrews is an eco-friendly whale-watching tour by Island Quest Marine that departs from the Water Street Wharf. This family run business offers 3 hour tours of the Bay of Fundy. You can experience spectacular seascapes, picturesque lighthouses and wildlife such as fin whales, minke whales and humpback whales.

Pro tip: Reserve a room at the historic Algonquin Resort St. Andrews by the Sea for an exquisite stay in St. Andrews. The year-round resort offers indoor and outdoor pools, spa, golf course and fresh seafood at Braxton Restaurant.

7. Drive on the bottom of the sea to Ministers Island

The sandbar connecting Ministers Island to St. Andrews is a sandy road that is washed out under 14 feet of water at high tide. 6 hours later, it’s backing up, so the “road” can be crossed. You can hike nature trails on the island and enjoy a living historical experience in Covenhoven, the Van Horne estate.

This provincial and federal historic site was the summer home of Cornelius Van Horne, an American businessman credited with helping build the Canadian railway. Tours of the barn, house and bathhouse right on the edge of the Bay of Fundy take place daily. Enjoy the serene experience, but be sure to return before the road is under water.

Grand Manan Island was voted one of the best small islands in the world by Reader’s Digest. Board a tour boat for the 10-mile sea voyage to spot puffins. This rare pelagic seabird inhabits Machias Seal Island in the lower Bay of Fundy. Contact Sea Watch Tours to enjoy the experience (the only tour company offering tours) while exploring Grand Manan.

St. John is Canada’s oldest incorporated city and the only city in the Bay of Fundy. Rockwood Park and Irving Nature Park offer unparalleled outdoor activities. The reversing rapids, where the Saint John River meets the Bay of Fundy, are a fascinating natural feature.

To learn more about Canada, explore these articles: