7 fabulous ski resorts around the world for all levels 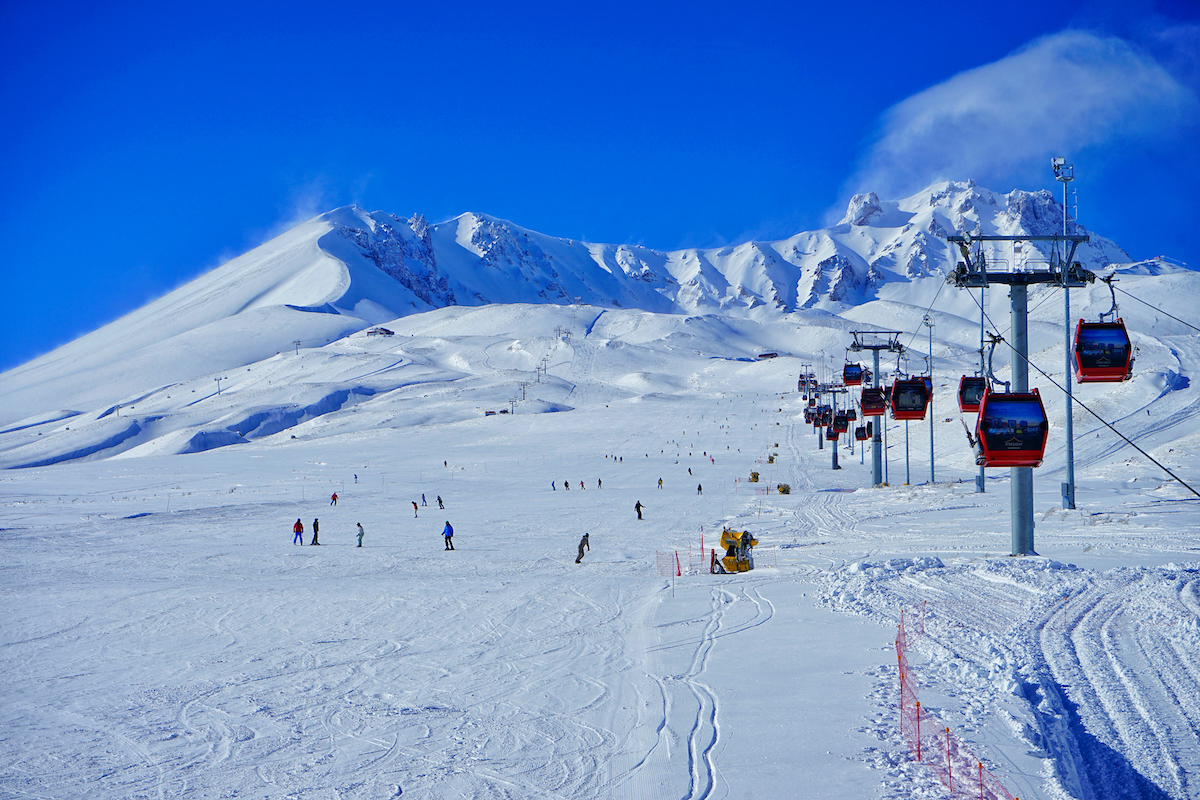 I started skiing in my 30s which is quite late. The reason was a new partner who was an avid skier and I just didn’t want to be left behind. He offered me a trip to St. Moritz in Switzerland and organized lessons with a private instructor. The man was a star and discovered that I had a natural talent for the sport. I made real progress and after a week of daily training I even hurtled down the Corviglia with him up close. I didn’t fall much, broke my leg or suffered any other injuries, I just had fun and got seriously addicted.

Thirty years later, the partner has been around for a long time, but my love of skiing remains. Everywhere in the world where I travel and it’s winter, I take the opportunity to find a ski resort and spend a few hours on the slopes. As I got older I found that I enjoyed cross-country skiing a lot, keeping me fit, strong, and less likely to break a bone. I also like the company so I ski in a group. I’ve skied in some pretty exotic places that don’t come to mind when you think of ski resorts, like Turkey and Lebanon. I haven’t been there yet Ski Dubai which is part of the Mall of the Emirates and has real snow … and real penguins. It’s definitely on my bucket list.

Here is a list of my favorite ski resorts. Best of all, they’re suitable for all skill levels.

Cortina d’Ampezzo, also known as the Queen of the Dolomites, is located in northern Italy, in the Veneto region. Surrounded by the Southern Dolomites and in a valley formed by the River Boite, Cortina hosted the Winter Olympics in 1956 and will host them for the second time in 2026 with Milan. The city is a major ski resort and offers slopes for all levels. It is also famous for its jet set visitors and thriving après-ski and nightlife, a truly fabulous resort where several movies have been shot like For Your eyes only and Suspense.

It’s also the start and finish point for the annual Dolomites Gold Cup race, but enthusiasts are catered for with 87 miles of slopes, six ski schools and some 300 instructors. The most popular ski areas are Faloria, Cristallo, Pocol-Tofana and Cinque Torri. Apart from all the summer and winter activities, Cortina is not only beautiful but also an elegant city. The best of Italian fashion can be found in the shopping street called Corso Italia with chic cafes and restaurants. Bar La Suite is a favorite place for après-ski.

Despite so many snow-capped mountains, skiing was not practiced in Lebanon until 1913. That year, a Lebanese engineer who had worked and studied in Switzerland returned to his home country and introduced the sport to his people. friends. As they say: “the rest is history”. Skiing takes off, a federation is created and ski resorts are born. The first was at The Cedars with the first ski lift established in 1953. The Lebanese became so proficient in skiing that they first competed in the 1948 Winter Olympics in St. Moritz / Switzerland. They did not win a medal but have not stopped participating since.

The fanciest and most popular seaside resort today is Mzaar, just an hour from Beirut. Due to the proximity, it is indeed possible to ski in the morning and swim in the Mediterranean in the afternoon. Mzaar has 25 lifts and 50 slopes descending from the Dome of Mzaar to the premises of the elegant Intercontinental Mzaar Hotel. Not only can you enjoy the scenic drive from Beirut, but also ski facilities for all skill levels, ski schools and instructors, the hotel’s thriving après-ski scene, and several excellent spa treatments for you. relax after a day on the slopes. The resort is so exquisite and beautiful that rumor has it that chic Beirutis descend on weekends dressed in the latest ski fashions without ever setting foot on the slopes, just to see, be seen and soak in the atmosphere.

Located in the Hallingscarvel mountains between Bergen and Oslo in the middle of the country is the ski resort of Geilo. You cannot dream of a greater variety of winter sports activities, from 40 trails of different levels to cross-country skiing, dog sledding, fat tire biking, snowshoeing and much more. again. Children who take their first ski steps will be as happy as daredevils who like to slip through the trees. This being Norway, the focus is on the saunas and wellness treatments that can be offered at Vestlia Resort. Feed your stomach with a warming farmhouse meal / family cafe Prestholtseter. In winter it opens the 7th week of the year, in February, and you can taste typical dishes with lots of sour cream.

Think powder snow and you have the essence of Niseko. Located 100 km south of Sapporo, it hosted the Winter Olympics in 1972. Niseko is actually four resorts on a mountain called Niseko Annupuri. They are: Niseko Hanazono complex, especially suitable for beginners; Niseko Tokyu Grand which is the largest of the seaside resorts; Niseko Village (Green Leaf) is ideal as a base for off-piste skiing; and finally the international family ski area of ​​Niseko Annupuri. The powdery snow so typical of these ski resorts comes from the winds of the Eurasian mainland which pick up moisture from the warm Sea of ​​Japan, which in turn forms snow clouds that eventually discharge the powdery snow. There are plenty of slopes and lifts, skiing as well as snowboarding, and après-ski is popular at Hanazono Resort.

Mount Erciyes is a volcano in Cappadocia about 16 km from the town of Kayseri and its airport. It is one of the oldest ski resorts in Turkey, very popular among locals with whom you can happily socialize on the slopes, on the ski lifts, in tea rooms and restaurants. There are two valleys between the cones of the volcano with well-groomed slopes, off-piste powder skiing, 14 ski lifts and beginner ski schools. In Erciyes you can stay at the rather basic Erciyes hotel, but it has a gate for access to the slopes, ski rental and reservation of an on-site ski school, as well as a bar and evening shows. Considering the proximity to Kayseri, I preferred the luxurious Radisson Blu with its fabulous spa, mountain views, and visits to Kayseri, especially the carpet, gold and silk bazaar.

Aspen, Colorado is one of the best and most famous ski resorts in the world where you’ll share the slopes with celebrities and movie stars. Its popularity has also made Aspen one of the most expensive places in the United States to buy property.

Located in an area of ​​the Rocky Mountains known as the Sawatch Range, Aspen includes four ski resorts with a variety of difficulties. From vertical drops to bowling to easier trails for beginners, Aspen’s four ski resorts offer something for skiers of all skill levels. They are Snowmass Mountain; Buttermilk Mountain for beginners with three express lifts; Aspen Highlands, a favorite with locals; and Aspen Mountain. When you’ve got enough exercise and just want to relax with a drink and spend some time, there is no shortage of places here. Aspen and Snowmass have over 100 bars and clubs, one of the best known and chicest being the private Caribou Club. If that’s a little too highbrow for you and you want to eat and party like the locals, the historic Red onion maybe more to your liking.

Saariselkä is the northernmost ski resort in Europe, located in Lapland in the far north of the country. It is best to get there by plane from Helsinki. Located between two mountains (fells), Kaunispää and Iisakkipää, the resort offers all kinds of winter sports activities and much more. Well-maintained slopes of all difficulties and several ski lifts – some of them sometimes not working when the wind is too strong for them to be safe – are there for the skiers. There is also a special area for children and Aurora, the longest slide in Finland. Ski schools and instructors are available for those trying their first “steps”. Snowshoeing is popular as well as cross-country skiing, and you can try your hand at an ice fishing safari on Lake Inari. It even provides you with warm and thermal clothes and boots. You can grill your catch (if applicable) over a campfire. If you are feeling really romantic, you can get married in Saariselka in St. Olaf’s Chapel. Apparently, quite a few couples do. It certainly makes a difference between having a beach wedding and being driven to church in a husky or reindeer sled. You can stay in style and spend your honeymoon nearby Hotel & Igloo Village Kakslauttanen.

Avid skiers will find these articles of great interest: